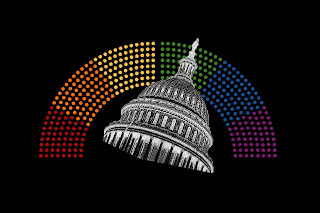 The House passed the Respect of Marriage Act, which goes to Pappy Joe for signature. d

The 'respect' in the title might be irony, or at least a little tongue in cheek. I really hope every republican fag  (yes, fag! - and I can't imagine a republican lesbian, can you?) who is married, or wants to be, looked at the break down of both the House and Senate vote. Your party does NOT respect you, or your love, or your civil rights.

39 Republican House members voted for the Act. That means, 169 did not. Less than one-fifth of the GOP House motherfuckers voted to support same-sex marriage.

(I think there is a better chance of a republican lesbian existing than a gay male GOP'er reading my blog. So I might be waiting a long time.)

In July, 47 republican senator said they supported the Respect Act. When it came down to it, only 36 of them did, with another 2 not voting. I guess they only supported it when they thought it wouldn't come up for an actual vote.

Cookie and I had a brief back-and-forth on social media about this - and agreeing upon it all. Yay for the Act, but there is still SCOTUS - this version of SCOTUS - who isn't all that eager to pass legislation giving us rights. Actually repealing them.

Yes, it's over a wedding website designer. I know it's bigger than that, because if you're reading this, you already know that any moron can create a website.

Listen, like I said the other day: if it's about hate, say so. At least be honest. If you say it's religious based and you're not vetting other married couples who has pre-marital sex or are divorced with no annulment, then you're just a liar - and that kind of can't be good if you're espousing "religion" as your cover.

But Alito and Thomas are scary motherfuckers and the other BLOTUS appointees are going to fall in line. For fuck sake, when we have to hope that Roberts is the voice of reason, we are just doomed.

I haven't looked up each of the Justice's marriages, but I bet the years I've been with 710 are longer than most of their "traditional" marriages.   ....and unlike Kavanaugh, I didn't sexually assault anyone.

Oh, there are Republican lesbians. Mary Cheney, for one. (I am pretty sure there are gay GOPers who read your blog, too, but I bet they won't come out as such in the comments.)