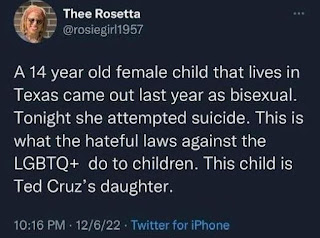 Ted Cruz's daughter is his worst nightmare. Well one of them, I suppose. You gotta believe that man is haunted by dozens of demons.
So, his 14 year old daughter, who allegedly came out as bisexual last year (I missed that one, should it be true) and tried to self-harm yesterday, or the day before.  Some are speculating it was beyond self-harm and was attempted suicide.
Of course, I feel bad for the child. We - as an LGBTQ group - have advocated for "It Gets Better" and places like the Trevor Project for those who are at risk for suicide because you identify as LGBTQ. She is one of these who can be helped.
I don't feel bad for her father. At all. Not an iota. Even if she was successful in her attempt, I wouldn't have an ounce of sympathy or empathy for the man.
Does this make me a bad person?
The question is rhetorical, because I really don't care. Much like Ted doesn't care - for the people who identify in similar fashions as his daughter does.
He lives in, and represents, a state where is a reportable and investigational offense for anyone performing gender-affirming care to trans youths. Just last month, Ted was one of the 39 people in the senate to vote against the Respect of Marriage Act.
And now he wants us to respect his family's privacy.
FUCK.  YOU.  TED.
You are a man who gets, and deserves, zero respect. You're vile. You're a hater. You're a hypocrite. You're a liar. You look like you smell something bad 100% of the time. I mean, you can't be blamed for how you look, but I thought I'd throw it in there.
At least Rob Portman had the gumption to vote for same sex marriage when his son came out as queer. Oh sure, he was a hypocrite about it because he talked about the hate of gay marriage till he found out his son was a nancy-boy.  While we benefited from that vote, let's make it clear - Rob didn't do it for you or me, he did it for his son.  Period.
Honestly, with parents like Cruz and Portman, I'd consider a way out too - though it would be more with a duffle bag, my ATM card and my thumb.
Teddy can't privately support his daughter while publicly vilifying the likes of her. I mean, how fucked up is that for a teenager to process?  Of course, that is assuming that he supports her privately and not just berates her and tells her what a horrible person she is.  If so, I'd self harm.  No doubt about it.
Here's the real problem:  Ted won't learn from this.
Even if he did - or allegedly did - I wouldn't believe a syllable he said.  Not one. Now, that would be my problem, but he hasn't made himself human on any level and only spews negativity and hate.  Honestly, can you show me one time where he hasn't, or hasn't attempted to pin blame on someone else (read: a democrat)?   I'll wait here, while you try to dig that up.
So yes, Ted's daughter, it does get better.  Unfortunately for you, that will be when you become an Emancipated Minor and get the fuck out of your father's house and state in which you live.  Godspeed.
Song by: Todrick Hall
Posted by Blobby at 12:07 AM

Imagine having Ted Cruz as a parent? Oh that poor child.

I very much doubt that Cruz supports his daughter. My guess is that he thinks she has fallen prey to social contagion, which is why we need to get The Gays off the internet and into "reeducation" camps. That is just a guess, tho.

Not sure whether to laugh or cry, so I'll take it in turns.

Fuck you Ted, no goodwill for you or your family. Karma owes you fire ants and a volcano under your house!

Hang in there, Teds daughter. Get the hell out as soon as you can. Write a tell all book about your piece of shit father and hit the talk show circuit.