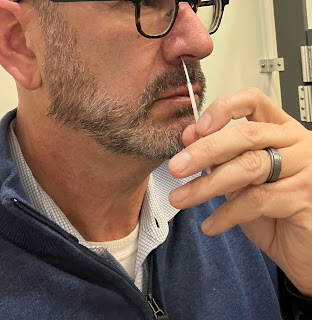 Ugh. My second Covid test. Well, third. The first one was for a pre-op, not because I exhibited symptoms.
I don't know I was feeling anything Covid related, but starting Sunday night I had a sore throat. It did not get better.
I did not actually believe it would be Covid, but where I work has a hotline and they suggested I get the test done. There's a lot of other shit going around lately, but it seemed wise to rule it out.
Actually, Covid is making a hospitalization comeback with the new variant - whichever one we are on now. Mostly in the "elderly", a category into which I might place.
There was dread in the answer. Not that I truly think Covid will kill me, but my friends might.  On Saturday, I had attended two holiday parties. And stayed with friends. I was concerned I had exposed others - many others. But I had also not gotten much sleep and possibly had a lot to drink. Running outside in 24F (felt like 14F) might not have been a great move, but I don't know.
Long story short (too late!), the test came back negative. That's good, as it could fuck with holiday plans.
With mask wearing, I haven't had a cold or sore throat in almost three years. I have forgotten what to do when I have cold or sore throat.  Ride it out, I suppose. Clinically, I don't think there is anything else to do.
Bother!
For the record: it turns out I do not like putting things up my nose.
Song by: the Chainsmokers
Posted by Blobby at 12:07 AM

Email ThisBlogThis!Share to TwitterShare to FacebookShare to Pinterest
Labels: Sick

No no no. If you are ill then the illness should be fucking with your holiday plans regardless of whether or not it is COVID. I don't know what it's like in Cleveburgh, but people are getting sick left right and center here and our hospitals are creaking under the stress.

A lot of sick people around. And now we know where not to stick things.