*
Can I be honest here?
I know it's only one post per year, but I'm kind of sick about writing on World AIDS Day. **
There. I said it.
This blog has been in business around 20 years (yeah, sorry for that!), and at least 15 of those I've written an annual post on this subject, as today is.........wait for it............World AIDS Day.
Guess what?  There is nothing new to say. Absolutely nothing.
I suppose if I were in HIV research or a serologist, I might take exception to that previous statement, but I'm 99.12% sure none are tripping over here to Blobsville (population: 1) to read my musings.
Of course I support those who not only work in the field, but especially those who have to see those who work in the field..........you know........because......well......AIDS.
I've lived long enough in my life that I now know far more people who live with HIV than I knew who died from AIDS.  Unfortunately, I know (and have known) plenty in both camps.
But this isn't United States AIDS Day.
Here, it is a "manageable disease" (for the record: I loathe that phrase). There are many many many far lesser developed countries in the world who struggle with containing and controlling the disease. They don't have the funds or the means to assist those affected, who will eventually affect and infect others. It's a problem.
This clip from the West Wing is about the potential disbursement of AIDS drugs to third world countries. Mind you, the episode is - wait for it - 22 years old (!!!) and antiretrovirals have changed drastically in that time. But it's still an important clip - more then than now, but still......now. Still.
*the title image was taken at the Chicago Art Institute of Art. The banner, was the art instillation.  Here is the bio card that went with it. 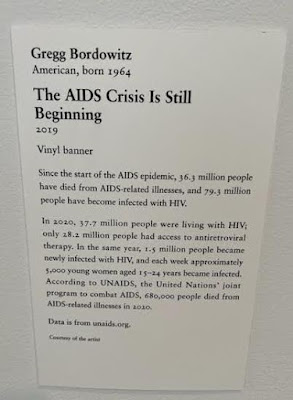 ** pun fully intended.
Song by: the Cardigans
Posted by Blobby at 12:07 AM

It is hard to persevere but I will; until there is a cure. If not possible I will settle for manageable - for all.