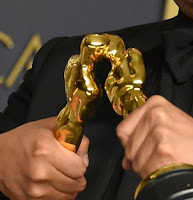 I am not saying I'm Nostradamus, or even Miss Cleo, but when I said in my Sunday post - and I quote - "....if Mike is true to his word (and I think we all know he's not)...",   he didn't select either Little Women or the Titanic as his top movie of the year.

As it turned out, it didn't matter.

As it also turned out, we differed by six of the 24 categories. It was a decent amount that could more easily determine a clear winner.  For a period of time, I believe both Mike and I thought we would end up in another tie, but then Special Effects spoiled that.............well, for him. Not so much fo me.

Spoiler Alert: I won !   But not gloating.

We could have called it a night at that, as there were still a handful of categories to come, but nothing that could change the outcome. A that point I was looking for, after a while, was to see if we were going to win all the other 18 categories on which we agreed upon. Our guessing stills were spot on.....until they weren't. Best original score. I did NOT see that coming......Mike either.

Then the wheels just came off........the big ones:  director and best picture. If you went back to my choices, I thought Parasite could be an upset, but I assumed for best pic, not for director.  Still, we both chose wrong.

I'm not sure if Mr. Mike and I were off our game, but our real time IM was all very civil. No real jokes or jabs. He didn't even ask me what time it was where I lived. It's an oldie, but goodie, just like Mike.  Now I'm wondering if he needs to be tested for the coronoavirus or something.  Or maybe we've just matured?

You know that moment when Kristen Wiig and Maya Rudolph came out and were "mad"? Well, I assumed it was at their stylist........and it turns out it wasn't. Their outfits weren't even a part of their "gag".  .....and that's a shame, because, I think they were unintentionally awful, though Rudolph's was still way better than her vonTrapp family curtain rejects from last year. 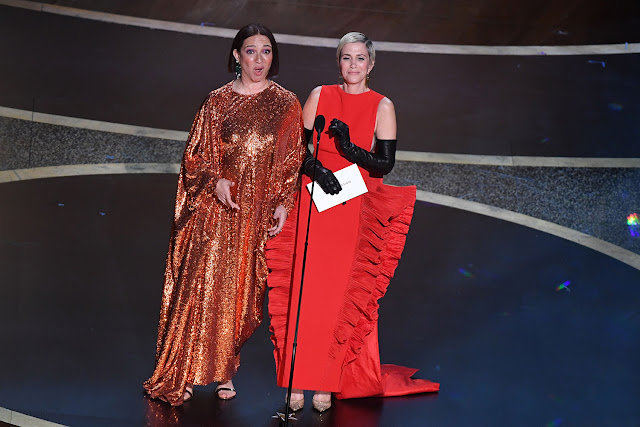 Wiig looks like Wiig had an Edna Mode reject for Elastagirl. And really, not black or red shoes?

They should have looked no further than Sigourney Weaver for inspiration. 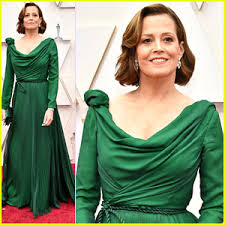 Mike and I, well, we didn't oooh and aaah over her, but sang her praise....as it should be. This ladies of a certain age, is how you should strive to dress at such an event, if I say so myself. 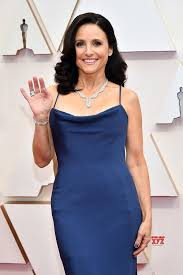 Faboo.  And she's worth like $4 Billion (with a 'b'), so I hope to fuck she purchased that necklace. I mean, it's tough to pass off at Ralph's, but wear that daily if you can. 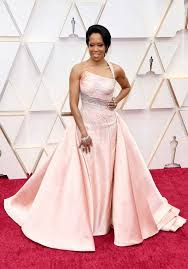 And while I certainly applaud the Academy finally getting a female conductor after 92 years (for one number, I might add - not the entire show) someone should have told Eimear Noone that C3PO meets R2D2 wasn't the right choice. 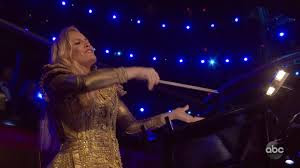 O.M.F.G.  - honestly, were there only these songs released for any movie this year? There were NO other choices??  None??

That Frozen II number should have remained in ice. Once again, Idina Menzel did not take off her nose plug from her swim lesson to sing. The only redeeming thing about that song was the woman who did the backing vocal from the beginning. I thought the song from Harriet started out really strong and good, but then it just failed.  And g-d love Pixar for always always always hiring Randy Newman......but enough. It. was. bad.

....yet not as bad as the "winner". Dame Elton sang a reconfigured, but shittier version, of "Philadelphia Freedom". It. was. horrid.  And I want to say I was validated by the Philly comment. I typed it (or a version of) to Mike and he goes, "ha! Peter just said the exact same thing."  I'm paraphrasing, of course. So it wasn't my imagination.

Then there was Eminem. I'm not a fan, but I'm not a detractor. My friend Jon was right in asking, "why invite him just to bleep his song, when you knew what song he would be singing - and that it had questionable language?"  I'm paraphrasing, of course.

However, the panning of the audience showed one big thing: every person of colour knew every word to the song, as did every white person under 35. Then you had the white folk in the elder bracket who just looked like, "WTF".

Poor Marty Scorcese actually winced during the performance. Now, this is a man who use the word 'fuck' in the Wolf of Wall Street - and I'm not kidding here- 506 times! It's in the Guinness World Book of Records.  So Marty, spare me, please.

It did occur to me - thanks again, Academy - that for some reason you have an 18 year old song performed at the Oscars. If you were in need of an older song by an "urban" artist, way to pick the white one, and not, oh say, Three Six Mafia for "It's Hard Out Here for a Pimp", which also won an Academy Award.

I get the no host thing, and I'm on board with it, but stop with the "funny" intros. They're not funny. The presenters look anything but comfortable doing them. Stop bringing out Chris Rock only to soften the blow when he has to do your dirty work and explain why the nominees have no people of colour in them.

Just announce the awards and let people speak. I mean, overall, you didn't play too many people off, but damn, that show could be over in two hours. I get you lose the advertising dollars, but I'd be eternally grateful.  Ok..........that might be a lie, but.....you get it.

And for the official record, and the accounting offices of Dewey, Cheatham & Howe......here are the results.  Yes, Mike's name is in fuchsia.....thank you for noticing. 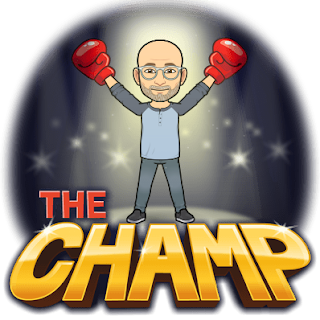 With all the sudden bonus publicity now going for 'Parasite' because of its win, the screens here are about to splash it all over instead of it being relegated to a past-bedtime slot for which I've already booked. Means I can now get my ticket changed to this Fri at noon instead of week after next at night. Better get in first before I'm the last person in the world to see what all the fuss is about. Must confess I'm pretty excited.

The Oscars are so absurdly out-moded now, like some laughably embarrassing and excruciatingly unwatchable anachronism from a by-gone era.

Bravo! Good for you!