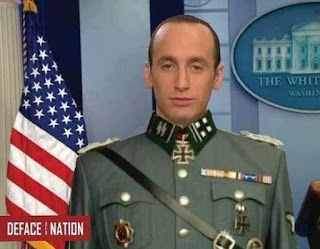 I am all very angsty today after Fat Fuck BLOTUS' comments about Sotomayor and Bader Ginsberg needing to recuse themselves due them not supporting him in his election. Or some such nonsense.

So, let's start to discredit SCOTUS, shall we?  After that, there is literally nothing left standing in his way.

You can say BLOTUS is the worst president ever, and he might be. But stupid he isn't - though, yet he is at the same time. Shrub was stupid, but he had Evil afoot with Cheney. BLOTUS isn't book smart, but he's wily and manipulative and has putz' like Heinrich Himmler Stephen Miller* to do his bidding.

And I've said it a few times, and oddly, have seen it come up in the last few weeks, including by Bill Maher to Pete Butt Edge Edge:  he (nor I) think that BLOTUS is going to leave the White House should the vote not go his way.

And I might be paranoid at this point (though I don't think a truly paranoid person would say that), but I'm actually believing this.

I honestly have a doctor's appointment in a week and a half. I am asking for a stronger antidepressant. Totally not kidding.


*sidenote: some stupid cunt (yes, I said it) who worked (works?) for Mike Pence just married Stephen Miller. How self-loathing must one be to be involved with one or the other, let alone both? I'm just assuming step-dad raped her repeatedly and now she wanted to find someone like good old step-dad.

my thought exactly - what self-respecting woman would WANT to marry/sleep with a total nazi like miller?

guess the police are gonna have to drag the dump outta the whites-only house in chains.