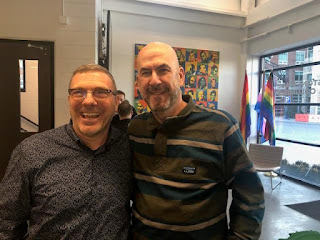 Friday evening, I was back in Columbus based on an invite from that LGBTQ History Group they have on FB.

As ambivalent as I was with the on-line group itself, attending a "reunion" seemed a bit......well, off-putting. I kind of likened it to going to a high school reunion, but with a lot more potential judgement and bitchiness.......and oddly enough, not even coming from me.................necessarily.

There were hundreds invited, there were about 90 on the evite who said they'd attend. While the organization / host (Stonewall Columbus) were prepping for 500. I told Morty, I think they accidentally carried a 0.

The plan was for me to go with Morty and his husband George........and nothing against those two fine gentlemen, but a long time friend, Craig, "guilted" me into coming down, as he was flying in from Kansas City (that's Missouri, not Kansas!) for this.

Ok, it turns out while he was coming in for this, he was also seeing his father and getting him into an assisted living situation. He just based the timing of his father with this event. And while that might sound crazy to do, Craig was one of these people we all knew (or wish we did), who truly was about gay history. He was a catalyst in many things gay-positive in Columbus, when it wasn't such a good time to be gay, let alone out, in the community.

As it turns out, I'm guessing there were 200 folks who might have shown. Save Craig, I knew exactly three of them and none of them well. Michael, who lived next door to Morty and myself for at least three years, kind of / sort of pretended to remember me.......you know except for my name or the fact that we lived next to each other.

There was Kelvin, who was all like, "heyyyyyyyy", he may as well added, "buddy, sport or pal", which is what one does when one cannot place you. Craig introduced me to people who pretended to remember me, which I know not to be the case, as I had no idea who they were. Friends will tell you of my ability for recall, and I was recalling none of them.

As it turns out I didn't even know Morty and George, as they unexpectedly could not attend. I totally missed them being there. Oh, Morty would have gone off making a dozen or two new friends, but Geo and I would have hung and had fun.

I was talking to the aforementioned Michael when Craig showed up. Along with his husband.

I should mention, while friends with Mr. Craig, I have not seen him in about 28 years. We talk, we chat, etc, but after he left Columbus, and then after I did, well, we were rarely at the same place at the same time.

While I wouldn't say we have a complicated relationship, it is...........ummmm.......viewed differently. Not in a bad way, just in a perspective way. He seems to think I'm the one that got away, which is odd, as we never dated. Still, we've always had a close and deep connection, so that's fine.

We were both emotional when seeing each other. A few times during the evening, he got a little, well, weepy, when expressing his thankfulness for my friendship.

As it was the first time I was meeting his husband - though I'd seen him on FB - I was on good (ish) behaviour. It turns out, Dan and I got along extremely well, and no awkwardness, which is kind of a feat in itself.

While I didn't really want to be there the full four hours (well, three, as I showed an hour into it), I figured Craig would be, which was fine. I did stay for the speeches, which focused mostly on census and voting issues, along with how far the Columbus gay community has come. However, it was Craig who wanted to leave early, and was good with my suggestion of getting dinner.

The three of us (710 could not join for the trip, but knows Craig as well), had a great time.

I'm glad I went, more for Craig then the FB group reunion. They didn't need me, nor I them.

Perhaps "Long time friend" would be a better term?

All the same it looks a lovely photo. It made me smile.
I don't think I have ever been to the faraway city of Columbus. I would like to have a look-see so long as it does not harm anybody.

Dr. Spo, I would be honored to take you on a tour of Columbus and THE Ohio State University. I can also show you the first Domino's pizza Columbus had, right off campus that was owned by one Mr. Bo. Schembechler Jr.