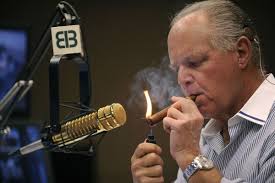 When I first heard Rush Limbaugh had advanced cancer, my first thought was, "how advanced?".

I ask for a few reasons.

I don't want one those Valerie Harper, "I've got 3 months to live" and then last six years.  I mean, I wanted Rhoda to live. I really don't care for Rush to hang around any longer than necessary.

Yettttttt.........I on the other hand, a slow and painful disease state and death sounds good too.

Should you have not yet figured it out, I'm not one of those calling for civility in the name of Limbaugh having cancer. The online folks who say, "I don't care for him either, but don't wish this upon him".

Well, I didn't wish it upon him, yet here we are.

The man in question mocked Michael J. Fox's Parkinson's. He also showed a picture of Clinton's cat and said they had a dog too - and show a picture of a teen aged Chelsea. Made fun of RGB's cancer. Yet other's are supposed to take the high road.

I suppose I could be the poster boy for Melanoma's #bebest campaign, but since her fucking turd of a husband doesn't believe in her pet project, I feel vindicated and off the hook.

Listen, Limbaugh's stances could all be an act to make $$$, but that means little. He's got his legion of assholes and haters who look up to whomever they think the man to be - the man who has let them think these things.

I'm not saying Rush deserves to die, but since he is (allegedly - and I still think it could be some fucking act) then I won't give thoughts and prayers. I won't be kind, I don't need to be. He hasn't and maybe - even if almost too late - he'll know how his actions have repercussions.

Anyway, I don't feel bad for him and nothing anyone can say would make me feel differently.

Email ThisBlogThis!Share to TwitterShare to FacebookShare to Pinterest
Labels: Cancer

Though I don't have to be ever aware, as you are, of his baleful presence in the country spewing out bile and bigotry, from what I do know about him it sounds to me like a perfectly justified case for experiencing 'schadenfreude' by the bucket-load.

make it painful; have people make fun of him; SUFFER, YOU FUCKING BASTARD!

Anne Marie is being so kind, and compassionate in my mind. He has been a cancer on the mind and soul of the nation for years.

I don't like to wish ill on anyone, but I think I'll quote that great First Lady:
"I don't care. Do U?"

I heard someone say, "If YOU had advanced lung cancer, and no health insurance, Rush would be the first one to tell you Tough Shit." And that's the truth. Fuck him. I'll save my sympathy for the thousands and thousands of cancer patients who actually deserve it.

He was awarded the Presidential Medal of Freedom, y'all! With this administration it seems apropos. My mind has been boggled so much lately that I think I may have a concussion!

Couldn't happen to a nicer person, Bless his heart!

I mentioned my "feelings" to someone today and they told me he was a "crisis actor". I almost died. Part of me thinks this is all fake and he'll come back and say he was "cured".

Years ago I found Rush entertaining. I don't think I could stomach him now. Is it me who changed or him?