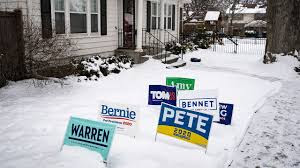 The state that for no good reason is so seemingly important to our political process. It is incredible to me that candidates will fall away due to a bunch of hoo-hahs in a state you won't hear about for, well, another four years.

A caucus and ethanol......maybe a corn maze, that's what it's known for. I'm not knocking the state, exactly. I'm just saying it is a lot of weight put into one race. Statistically, it doesn't really pay off either.....for Dems or the big fat stupid, stubborn Elephants.

As of 21:36 EDT the caucus is still going on, so there aren't any leaders as of yet, and well, Blobby needs his beauty rest. So I can't even weigh in on who will be weeded out. Not that it matters, not really.

Going from 1972 - 2016, and not including those candidates running unopposed (i.e. presidents running for re-election) below are some stats for both parties.

I get that for whatever reason, the $$$$ dries up a bit if one doesn't show well in Iowa, but a 34% win didn't help Mike Fuckabee win the nomination, and the 13% that eventual nominee McCain won, well.....didn't do him any good either.

Of course, I'm still baffled by how one 'scream' in from Howard Dean sunk his campaign.

Song by: Dar Williams
Posted by Blobby at 12:07 AM

I didn't mock the people per se, but you gotta admit, the events of the last 24 hours doesn't bode well for the state.....or some of the people.