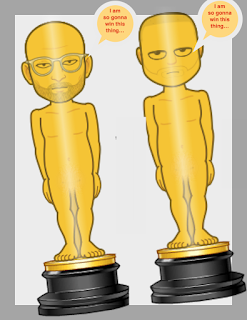 It's that dreaded time of year. The one where Morty sees an 'award post' and just hits 'back' on his browser tab.

Actually, he told me he saw one, though I now do not remember which one.

Anyways, this is our 9th Annual Academy Award Guessing Game®

I'd have to go back to see who is winning this so-called race, but I'm thinking I won't like the answer - so I'll just live, head buried in the sand, which resides in the land of MakeBelieve.

I probably say this every year, but this year seems the hardest. Especially in a few categories. Acting, not so much. It's not that I agree about the probable winners, but I know the writing on the wall when I see it. No, I'm stymied at best picture and director.  Stupid Parasite, making this more complicated than I anticipated.

That said, if Mike is true to his word (and I think we all know he's not), I could run away with this thing. 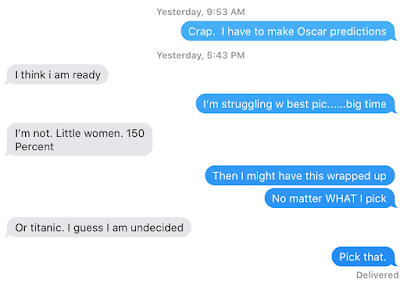 By all accounts, the four major acting (well, I guess that would be all of them) awards are a given. I don't expect Mike's choices on these to be different than mine. But then, things get tricky.....not for everything (I think), but enough that it could cost me............or him.

Let's have at it, shall we?

Performance by an actor in a leading role nominees: Antonio Banderas in PAIN AND GLORY Leonardo DiCaprio in ONCE UPON A TIME...IN HOLLYWOOD Adam Driver in MARRIAGE STORY Joaquin Phoenix in JOKER Jonathan Pryce in THE TWO POPES

It should be Banderas, but this isn't going to go his way tonight. Should I be wrong and lose this contest due to it, I would be fine with the outcome - Antonio's and mine. I think we can all agree to be happy that Adam Sandler doesn't appear anywhere on this list.

Performance by an actor in a supporting role nominees: Tom Hanks in A BEAUTIFUL DAY IN THE NEIGHBORHOOD Anthony Hopkins in THE TWO POPES Al Pacino in THE IRISHMAN Joe Pesci in THE IRISHMAN Brad Pitt in ONCE UPON A TIME...IN HOLLYWOOD

I'm not happy with any of these options - other than maybe Hopkins, whom I think should win. But it looks like it will be Pitt. Only two people I know liked his movie, but that's still two more than who saw Hanks play Rodgers

Honestly, the worst category of the evening - and I'm throwing hair and make-up in there. They had some exclusions - no, not you JLo(w) - but they might just give it to Johansson. The academy loves loves loves portrayals of dead celebrities - I mean, how else do you explain Jamie Foxx having one?  But I really don't want it to be Zellweger, but you know it's gonna be.

Possible Johansson could upset this, as she won't get (I don't think) the lead award. But Dern was so smarmy in her role, as I said before, I disliked her from the word 'go', so she did her job.

Do you really want to bet against Pixar ?

Hands down - just for the technical aspect. That said, the Lighthouse had a cool look to it.

Throw the girls a bone already.

This is one of the two that could do me in. It's going to be my selection or Joon Ho. Either are deserving. I'd be surprised as shit if it were Scorsese or Tarantino.

It seems like skateboarding girls would scare me, so I don't dare NOT give them the nod.

While I could be wrong on Best Pic, and if Parasite wins that, it could also possibly pick up Foreign Film too. Again, I liked it, but I LOVED Pain and Glory. ...and again, I'd be happy to lose the entire contest here, if Almodóvar picked up this prize.

I'm going on record saying that the world doesn't need two Megan Kellys. That said, whichever of these three made up Charlize Theron deserves the award for that spot on transformation.

Achievement in music written for motion pictures (Original song) nominees: "I Can't Let You Throw Yourself Away" from TOY STORY 4 Music and Lyric by Randy Newman "(I'm Gonna) Love Me Again" from ROCKETMAN Music by Elton John Lyric by Bernie Taupin "I'm Standing With You" from BREAKTHROUGH Music and Lyric by Diane Warren "Into The Unknown" from FROZEN II Music and Lyric by Kristen Anderson-Lopez and Robert Lopez "Stand Up" from HARRIET Music and Lyric by Joshuah Brian Campbell and Cynthia Erivo

Oh you know it's gonna be this big old queen, so he can finally have an Oscar at her Oscar party.

My other possible downfall category. Again, it's coming down to 1917 or Parasite. I'm taking a calculated guess, like Roma last year - the academy will play it safe since they can give Parasite the best foreign film prize.

It can't be easy to make LA look 1969 again. But I said something similar a few years ago with Carol and lost my shirt on that one.

This is not an educated guess. It's just a guess.

I'm going out on a limb with this one. Vroom vrooom!

...and then swinging back to safe territory with this choice.

I think we all know it won't be the Irishman, but with al the others so deep into CGI, you'd think it wouldn't be one of the two that don't look it - which is why it will go to my choice.

I want Jojo to win something! I thought Two Popes was good, if not all fiction. And Little Women? Everyone's whining of Gerwig not getting a director nod. Should she want one, maybe next time not do a movie that has been done 14 times already. The academy might give it to her, but it's purely consolation. I have only seen previews for the Irishman, but correct me if I'm wrong - it's GoodFellas / Casino / Godfather with Italians playing Irish guys - right?

Sorry Sam, 1917 was a good movie, and while not adapted, the story itself was hardly original. Tarantino has two screenplay awards, he won't get three. Knives Out could pull an upset, but I don't think so. Parasite is the most original......by far.

So, I'd like to thank the Academy for how few digs I took at my competitor in the above section. I should get an award for that.  Maybe two. I dare say, our award chat will bring some snipes (from him about me) and I'll just have to be the mature one here.

But stop back on Tuesday for the recap. I know you're all dying to know. Or perhaps, just dying.

We will see how this goes.

I can see that this year the likely winners in most categories will be in a high proportion of films I haven't seen, nor are likely to see. That's just the way it goes, I guess.

As at now I'm still waiting to see if 'Cats' did, in fact, win the Razzie for best-worst film which I think we can pretty well bank on. Sir Andrew L-W will doubtlessly be fuming that he ever allowed it to be filmed, at least in the way it was.

I agree, from those that I've seen, that Banderas should carry the trophy for best actor, but I also think that he won't get it.

If my memory serves, I was trounced during last month’s Golden Globes awards ceremony, picking a measly 4 or 5 categories correctly? The shame. The SHAME. So there is plenty riding on this evening’s broadcast. My fragile ego, namely. But hey, it’s all just fun and games. I don’t know why Blobby takes this so seriously and is so mean about things. Just his nature, I supposed.
After countless hours of research and late-night conversations with my sources, I am pleased to submit the following list of winners. May the best man win.
Hey what time do the Oscars start out there in your neck of the woods, Blobby?
Performance by an actor in a leading role nominees: Joaquin Phoenix.
Haven’t seen it, not planning on seeing it. From the previews alone, it looks too dark and violent. Real life is dark enough these days.

Performance by an actor in a supporting role nominees: All the money is on Brad, just so the producers can swoop their camera at Jennifer Aniston’s face during his acceptance speech. Let it go, people. Let it go.

Performance by an actress in a leading role nominees: Renee Zellweger. Hey, at least they’re not gonna give this one to Little Women. Let’s find some solace in that.

Performance by an actress in a supporting role nominees: Laura Dern. I watched Marriage Story until just after Laura Dern’s first scene, and then realized that I didn’t care about any of the characters so i turned it off. Or more honestly, probably flippped channels over to The Great British Baking Show. Might as well learning something if I’m gonna park myself in front of the TV.

Best animated feature film of the year nominees: I’ll go with Klaus, even though I think it’s wrong to make an animated feature out of the story of the rich Newport, Rhode Island socialite who was convicted and later acquitted of trying to kill his wife. Like I need a cartoon about this? Wait. What’s that? Oh, this is actually a Spanish-language film about Santa Claus? Damn. Let’s still go with that. And yes, I really want to bet against Pixar.

Achievement in costume design nominees: I would rather poke my eyes out with a stick than see Little Women take home any gold tonight. But this is a competition, and I’m determined to win, so I’ll go with this sappy period piece. Chicks, man….

Achievement in directing nominees. My man Sam for 1917.

Best documentary short subject nominees: I’d pay to see Blobby chased down by a swarm of skateboarding girls (I don’t want them to hurt him in any way, just steal his lunch money). But i digress. In this category, I’m picking In the Absence.

Best international feature film of the year nominees. Parasite. All the kids are talking about it.

Achievement in makeup and hairstyling nominees: Bombshell. It would be funny if they had made up Megan Kelly in blackface for this movie. Because as she said, what’s the big deal?

Achievement in music written for motion pictures (Original song) nominees: I’m Gonna Love Me Again. Haha this one make me laugh. I can already the texts coming my way when Sir Elton and his hair pick up this award.

Best motion picture of the year nominees: 1917. So many choices here. And I saw 2 of them. (Well, 2 1/4 if you count the few minutes I endured Marriage Story). i agree with Blobby (cue the jaws dropping) that Parasite will win best foreign film, so it clears the path for Sam Mendes.

Achievement in production design nominees: Seems like i should have gone first here, because it looks like i’m just copying blobby on this one. And while he is a fountain of Hollywood inside knowledge, it just hurts sometimes. Anywhoo— it’s gonna be Once Upon a Time.

Best live action short film nominees: Here’s where it gets interesting. In honor of the hours that Blobby spends there every day, i’m going with The Neighbor’s Window.

Achievement in sound editing nominees: Hello Blobby? Did you see 1917? Or more importantly, did you HEAR 1917? A dollar side bet says this one will go to 1917.

Achievement in sound mixing nominees: 1917. Such a daring choice.

Achievement in visual effects nominees: OK, here’s my swing vote. I’m going with The Lion King. There. I’ve done it.

Adapted screenplay nominees: JoJo Rabbit. Cuz Blobby says so. And i’m just a little shook with this quote from Blobby: “I thought Two Popes was good.”

I always for you to win on this