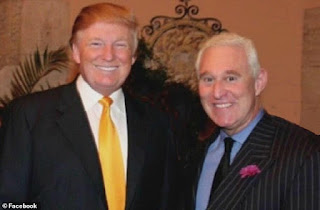 This place - the U.S. - just makes me sick to my stomach.

It's official official. There is no longer three branches of government. Justice clearly has its tongue up Executive's shitter. Deeply. Firmly. And moving it around until Executive says otherwise.

Just the audacity that a fucking tweet by BLOTUS has the DOJ bending over backwards and reversing (read: lowering) sentencing guidelines for BLOTUS cocksucker, Roger Stone. Instead of nine years in prison - where I was hoping he'd "pull an Epstein" - he's looking at 18 month, tops.

Sure, that's more than Lohan time or Huffman time, but barely.

I honestly, have been upset about this all fucking day. With acquittal out of the way - if you think he BLOTUS didn't give a fuck before, just watch.

He's already fucked everyone with the budget. Medicare ! Medicaid ! Social Security ??  All the things he allegedly said he wouldn't do in last weeks State of the Union.  (I have nothing to confirm that, since I didn't watch it or read about it.)

And for the auto plant that shut down here, where he told everyone NOT to move, he'd be getting jobs back?  Well he didn't get them back, but someone else did.......to build electric cars, and BLOTUS just killed the tax credit that would reopen the plant.

He is a Piece Of Shit.

When I say I'm 'sick to my stomach',  after reading the DOJ shit, my stomach has been in knots. It is so upsetting - and seemingly, there is nothing anyone can do.

I mean, four federal prosecutors walked off the job after the DOJ announcement. Good for them. And fuck Bill Barr. I mean - really. FUCK HIM.  Dry. Hard. Multiple times until he bleeds out. Yes, THAT is how pissed I am.

What I don't know, and can only hope for, is if the judge has to take the DOJ's new recommendations. If not, can't he/she lock him up for the full nine years?    ........though Stone will have a full pardon before the end of the year.

the orange shitstain says JUMP and everyone jumps to please the baby. this was my WTF? moment yesterday.

it will be interesting to see what the judge says. then the baby will sign a pardon. and stone will not die in jail, as he should.

One more reason, I believe we're up to the tens of thousands, to vote that fat fuck from office.