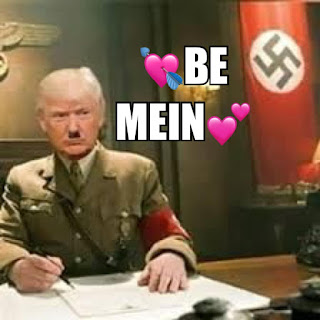 While it's not my valentine for you, well, you know to a bunch of  black hating / jew hating / gay hating / women hating / ability to read past a fifth grade level hating white males running around this country - they'd gladly drop trou and bend over on the first date with
<------- that "guy".

but this <---------- asshole begets these assholes (except I can't get the pic to attach correctly).

A group called the Patriot Front marched last week in DC. It was like Up With Fascism, as they all had matching shirts, pants, shoes, etc.

Oh - the 'best' part:  they wore white neckerchiefs over their mouth and nose, so no one would or could recognize them.

Forget the fact that in DC it's illegal to march with masks - not that anyone stopped an all white / all male hate group.  Not in the current capitol of US Nazism.

I do love how they are big enough to march, but not man enough to show who they are, because, like them also being gay and don't want anyone to know, they really don't want to get fired from their jobs, or have their neighbors know they're semi-professional haters.

They are pussies, is what they are. Just like their idol.   .....which you'd think for all their alleged religious rights believe they claim to have, it's to not worship false idols.........or golden (read: orange) calves (read; cow!)