Rip Her to Shreds 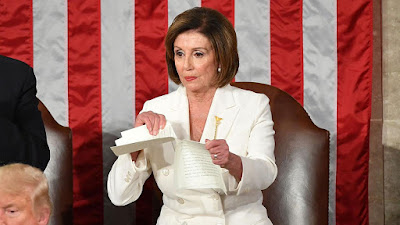 I'll be honest, at first, upon waking at like 03:30 (not kidding) yesterday, and scrolling through news, I was kind of pissed at Nancy Pelosi for pulling a Sinéad.

I assumed it was for the photo op / pr buzz, like her mocking hand clap of 2019.

My thought was, of Michelle Obama's, "when they go low...." comment, which of course is lost on me, as at this point I WANT to go lower. Yet when Nance did, well........I wasn't happy about that either. It gave fodder to the Right. I hate that more.

As the day went on, I kind of let go of that. I hadn't seen, at first, the refusal to shake her hand. In a way, she could have left it at that, and he'd have been the putz, but as we know, nothing sticks to that asshole, so maybe she was ok.

I was much more impressed by the Parkland father who got thrown out after BLOTUS made lies about gun violence. Good for him for shouting out - literally. And good for Tim Ryan for just walking out and comparing it to big time wrestling - all fake. I know the last one was staged (most likely) but that's ok - this whole presidency has been staged.

With the impending removal from office vote the following day, and knowing the outcome before the actual vote, what the fuck Nancy - go for it. And she did.

And you know, hers still isn't the biggest dick move of it all. I think that's still Mitt Romney. Oh yeah, he voted to remove BLOTUS, but A. he knew it was meaningless.  B. Where the fuck was he before hand. Suck my dick Mitt - and not in that way you probably do all the other Mormon men during your missionary.

Hopefully this was BLOTUS' last SotU.

I had not heard about tim ryan; thanks for the update. GO NANCY!

I didn't like Nancy's stunt. It stooped to his level and we should be better than that.

The whole political scene is becoming a farce.

The only thing about Nancy's stunt is that it stole the limelight from President IT.