Kiss Them For Me 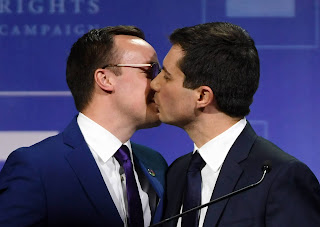 The scenario was going to come up at some point, I suppose. I guess my surprise is that it took so long.

Maybe "folks" though Pete Butt Edge Edge wasn't going to be in the race this long?  Maybe "folks" didn't think he'd actually be a threat to a potential nomination?

So someone - Rush "help me, give me a Medal of Freedom, I'm dying" Limbaugh wonders how people will have to explain to their kids, about two men kissing.

Naturally, as Pete would do - as any true candidate should do (yes, I'm inferring that BLOTUS isn't a 'true' candidate.......for anything) - he answered professionally, but accurately and with a slight sting.

I'd like to think in a debate between BLOTUS and Pete (I refuse to demean him by calling him 'mayor' - it's rude) that BLOTUS wouldn't dare bring up the gay thing, as that just opens up the multiple marriages, affairs, hookers and payouts to hookers.

....but on the other hand, BLOTUS isn't really that smart. Actually he is, but he's reckless. And he'll lose those odds.

That said, Pete's response was nice, but I like this one much much better......

Actually, the version I saw, but cannot find, was a response back to Rush saying, "explain it to your kids the same way you did about "grabbing her by the pussy".

So, at some point the gay thing will come up again.  How or when is unknown, but it's in play.

Song by: Siouxsie and the Banshees
Posted by Blobby at 12:07 AM

"love is love, kids." that is all a kid needs to know.

I like that both P.B. and now L.V. have aimed it back on the hypocrisy of the complainants, or at least those who'd support either of them. It needs to be done - though we all know it'll hardly make any difference. (Sigh of exasperation!)