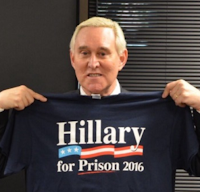 I firmly apologize for my fourth political post in as many days.

As you (or most of you) know, I've been trying to stay away from these, but sometimes they have to be done and the Fucktard in the White House just can't go unchecked........though nothing seems to stick to him, so, maybe it doesn't matter.

So for all of Barr & BLOTUS attempted workaround of 'the system', it seems Roger Stone is getting 40 months in prison.

Bet it appeal or pardon, this guy isn't staying in prison, though it's a nice idea.

No, I want this guy to be sodomized in prison on a daily basis. It'd be nice if it sent a signal to all those who bend over for the White House that they'll have to bend over in the Big House.  ....and it's just as nonconsensual.....but this time, it's with people of colour.   ......ad you know, that's gotta hurt....on every level, which I'd be loving......on every level.

Song by: Electric Light Orchestra
Posted by Blobby at 12:07 AM

what stone REALLY deserves is to die in prison.