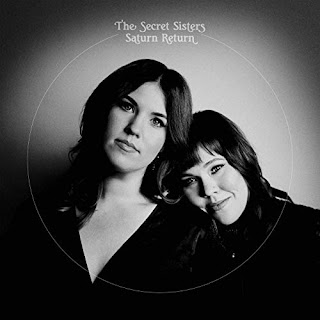 Admittedly, I knew nothing about the Secret Sisters until I started listening to John Paul White a few years back. On a small handful of songs, they sang backing vocals on his last two albums. But honestly, this is how I find music sometimes - though it was easier when there were albums or cds and those releases had liner notes and credits.

Apparently, Saturn Return is the sister's fourth disk. Who knew? Well.........someone I suppose.

The disk is nice, if not low key. Two sisters, singing alto (more or less), intertwining their voices. They provide great harmonies. The Roger's sisters (though the have married names now, I think)  have been referred to the female Everly Brothers, and it's a comparison that isn't grandiose, and one that is fairly accurate. They do hail from Muscle Shoals, so the have a roots background as well.

"Late Bloomer" is a really nice song, if not musically Carole King Tapestry inclined - if nothing else but the piano. Not a bad thing. Not easy to pull off, but they do.  To a degree, "Hold You Dear" evokes the same King vibe.

Most songs are sparse-like, but now and then they change it up. "Cabin" is nice enough, and halfway through, out come the Neil Young / Crazy Horse guitars - but not the distorted ones. The shift / the song, it allegedly about Brett Kavanaugh (ugh) and the women left hopeless and voiceless.

And on "Hand Over My Heart", it is downright pop-like.  That's not necessarily a bad thing, and they do a few non-traditional vocalizations to not make it so standard.

In previous songs, the harmony was constant. This go-round sometimes there is a single lead vocalist.

The "girls" also invoke waltz-like music ("Tin Can Angel"), but with good arrangements.

I don't know if the group uses all female musicians - though two of their videos allude to that fact. It would be nice if they did - as clearly women can do this well and with great talent.