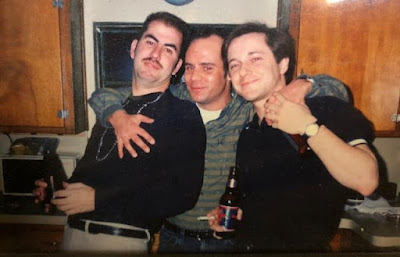 I got invited to a private Facebook group, which I immediately accepted, but then immediately thought I should have given it more thought.

The group is on Columbus LGBTQ History.

For those who need a slight Blobby history lesson of their own - I spent 14 years in Columbus and THE Ohio State University, where I met not only 710,  but my besties of whom you read about here......often.

I was "happy" enough just to be a voyeur to this group for the first few days. There seemed to be a lot of drag show pictures. Unlike many, I'm not a huge fan of the art. I don't disapprove of it or anything, but I have seen far far far too many bad shows. My thing is: if you're gonna go to all that effort and get all dolled up (let alone the prep to get make, wigs, shoes, etc), at least know how to lip synch.....or the words to the song you selected.  (though Mr. Larry. who used to cut my hair, was excellent at his drag craft!)

So the drag aspect of this history was not in my social circle. A lot of those posts were lost on me. Ditto with the gay softball stuff - as I never played.

I did kind of on-line stalk some people who posted and commented. I knew some of the folks - adjacently. And then there were the posts from 2012, and while yes, it's technically 'history', it's past my time in Columbus and that all felt foreign to me.

710 and I left town in 1995, and you know before that, homos weren't really taking their SLRs out to the gay clubs, so I have way fewer pictures than most that I could even contribute.

Morty texted me Friday night, asking if it was ok to tag me in a picture he was wanted to post. Of course it was, I said right away...............and then I double-backed making sure it wasn't from one certain night of our lives. He assured me it wasn't, so I said, 'yes'.

You see the picture above. I don't know what look for which I was going back in 1992 (?), but thankfully for all, it didn't stick. I'm there with Mitchell and Morty. I adored both, but it took a long long time to gain Mitchell's approval. In retrospect, I can't say I blame him. I miss him daily!

From that post, one comment came back to me - a very casual friend, who was doing his own pseudo-stalking. He said something we were both thinking - and I'm guessing a lot of people who are posting and finding each other after years are doing the same - {paraphrase} "yes, I'm still alive".

From that era, if it wasn't potential od'ing or prison time, it was AIDS. There is a lot of statistical evidence present to assume we might not still be roaming this planet. Oh - and since many of us are now in AARP land, natural causes cannot be ruled out anymore.

My melancholy, I think, set in the same way I had it when living in that town, participating in that life.

I had great friends, but the friends of friends, never warmed up to me, nor I to them, so my circle never expanded. I think, some might have recognized me by site, but certainly not by name. Me, being me, I knew who they all were. The odd thing is: I felt left out of groups I didn't want to be in the first place. I'm sure there's a psychological term for that.

Still - those feelings arose while going through all these posted images.

There are some Bruce D posts with all his 'friends' who were all shirtless, tanned and handsome. I was never going to be in that group or get an invite. I couldn't even get an acknowledgement from him when in P-town in 1990. Sometimes you're just not worthy.

I did throw up a test balloon on this group. I posted one of my own pics, the few I had, from a party I had. Two - count em - people liked it. I laughed to myself. Others are racking up dozens and hundreds of likes. I confirmed my absence for the last 25 years didn't really make a mark on anyone.

Honestly, I'm not moping - I totally get these were and are my own insecurities. I just kind of thought I was beyond those - and I am mostly. It was just a weird flashback.

I did reply to one post - a still dear friend - who truly was about the history, and asked to remember those who are no longer with us. While Craig didn't mention AIDS, that's really what it was. It was somber, sobering and endearing.

This also sent me down a rabbit hole for a friend of mine, Stuart, who died in 1995.

I would take him to the hospital and stay with him. I would call his brother collect via a hospital pay phone (no cell phones yet!), to update on progress. Stuart's parents came in the middle of the night - literally - and took him home, where he died. I never saw him or talked to him after they showed up.

So the hole of rabbits of which I speak, has been trying to identify his death notice and place of internment. I know, should it exist at all, it is here in Cleveland. But I think their 'shame' won't have me finding a record anywhere. I haven't located his brother either, just to drop a note. For me getting to think about and process that, I do thank this group.

We will see how long I stick with this Facebook group. It will most likely run in the background. Perhaps my perspective will change, perhaps not.  If we're being honest about FB, some posts are for recognition. I'm not going to get that here - outside of my friend's of 30+ years. And that's ok.

Maybe I'll be a voyeur, or maybe not.

I barely recognized you. and morty is a cutie.

I believe the look you were going for was Rico Suave.

I am not a fan of drag, just not my thing and never really enjoyed it. But I remember during my brief time in Columbus going to a couple of drag shows and they were FUCKING INCREDIBLE. Full on production numbers done up right, with a "small cities try harder" feistiness. So it doesn't surprise me that drag might have gotten the photos and the memories.

Very close description of how I felt when looking back thru Facebook. I deleted my account as the pseudo stalking didn't bring me any happiness.