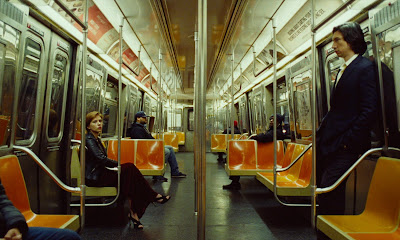 Movies and their distribution have been changing in the last few years, but not as much as this past year.

Roma, the Irishman, the Two Popes, the Report and today's Marriage Story, all did their very very limited theater run before moving right to streaming services, be it Netflix or Prime.

Thus, I don't think I can only abide by movies in theaters going forward. I think, for the time being - this year - I will stick with them needing to be released for showings in a cinema. I mean, that's the Academy's rule currently.

Secondly, while this could free up the ability to see more movies, I'm not upping my goal that much - 27% to 18. I toyed with 20, but then I thought of the Irishman. It might be a really really really well regarded movie, but it's 3.5 fucking hours long. That should account for two movies, no? And since it's Scorsese, that should count for another 1.5.

In honor of this change, New Year's Day, we watched - or tried to - Marriage Story. At home. On Netflix. We missed it when it was at a brick & mortar.

In what world, honestly, does one see three movies in a week and a half and still see Adam Driver in two of them and Scarlett Johansson in two? I think we can all agree that neither are my favourites.

Noah Baumbach's semi(?)-autobiographical movie is not easy to watch. The gist of it is, a once happily (allegedly) couple embark on a separation and divorce. Hilarity does not ensue. It should be called Divorce Story.

I'm assuming the difficulty watching isn't as much about the pace of the movie, but the continual unhappiness that envelops in every. single. scene..  There is no 'up' here. This makes Kramer v Kramer look like Airplane II.  I mean, c'mon, neither of those were funny funny.

Perhaps it would be easier to take if either one party was a fully formed good or bad person, but they're not, and I suppose that is the point. Many marital splits are just decent people falling out of love with no outward act of malice.

This was supposed to be their divorce, but who would watch an amicable splitting up movie?

Driver and Johansson have some really good scenes - acting wise. Some of Baumbach's camera takes can be pretty amazing.

I'm not 100% sure if I thought Driver and Johansson have upped their game in terms of performance, or is it just good acting..........for them. There is a not so subtle difference.

I literally liked one of the characters in the movie - Merritt Wever. Julie Hagerty (hey! another Airplane II reference!) was ok.  But for the principals, not so much. None of them were hate-able for the most part, but they weren't likable either.

Two I think you were supposed to hate were their lawyers: Laura Dern and a wonderful Ray Liotta. He has not been THIS good since Operation Dumbo Drop! Something Wild. Dern must have done a good job too, because she made my skin crawl from the word 'go'.

The movie is getting raves, and I get it. I get that it's a story already told, but it's award season and hurt, angst and anger play well with voters. It just all seems so Oscar-baity to me. Had it been released in March, no one would give a fuck about this movie.

And to reassert how much Driver annoys the fuck out of me: he literally (not figuratively) walked out on an interview with Terri Gross because she had the nerve ! to play a clip of his performance. He didn't just walk out for the clip time - he left. Completely.

Apparently, widdle Adam doesn't likey-wikey to hear or see his work. Boo fucking hoo. Grow the fuck up. You chose your profession. If you don't like it get a job at a gyro shop.

So we saw it. I can't unsee it, but it's not as memorable as reviews would have you believe.

Casualties of this Netflix lark are increasing alarmingly. I never got to see 'Irishman' or 'Roma' - and looks like 'Marriage Story' is going to disappear down the rabbit hole the same way, all films I so much want(ed) to see. Don't even know what all this Netflix mullarkey is and, frankly, not that interested to fund out, except that it's making to look as though cinemas will sooner or later become obsolete. But I'll not be around if and when that happens.

I don't know where on earth you and Raybeard find these movies! I've never heard of most of them and wouldn't pay the ridiculous theater prices to see them. I guess for theater going, I prefer escapism and I'll watch quiet movies on television. I loved Ray Liotta in Dominique and Eugene. Such beautiful expressive eyes.

Merritt weaver
So underused in a The Walking Dead