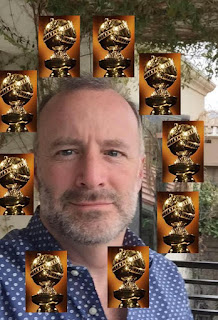 It is now officially open season on  Mike / Blobby Bash Each Other.

Unofficially, this is year round, but there is a formal period of time for this event. It's never pretty, and while someone might be victorious, neither of us really win.

I could be wrong, but neither Mike or I will die over the Golden Globes - whether we do it or not. I've already resigned myself to losing this one, because, well...........they're the Globes.  Paul Hogan and Madonna each have one.  Robin Williams has had at least three - and look where that got him.

This is a crapshoot at best. And a crapfest for certain. Let's face it, this is just warm-up for the 9th Annual Academy Award Guessing Game®

Let it be known, I do not agree with this choice. But I play to win.  Sometimes.

I saw four of the five performances here. Pryce was great, Bale was very good. Don't start me on Drier. Honestly, Bandares has the performance of the year - and maybe his career. As it is the Globes, I'm hoping foreign actors won't be a deterrent.

Best Motion Picture, Musical or Comedy Dolemite Is My Name Jojo Rabbit Knives Out Once Upon a Time … in Hollywood Rocketman

I saw all but Blanchett's performance. Awkwafina was by far the best.

Best Performance by an Actor in a Motion Picture, Musical or Comedy Daniel Craig, Knives Out Roman Griffin Davis, Jojo Rabbit Leonardo DiCaprio, Once Upon a Time … in Hollywood Taron Egerton, Rocketman Eddie Murphy, Dolemite Is My Name

I think Egerton is key-ute, but I don't think they reward two flaming queen performances in a row (Bohemian Rhapsody was just last year). And cute doesn't win you awards - as Rami Malek proved last year (he won, he's just not cute). Daniel Craig did a great job of portraying Foghorn Leghorn, but unacceptable as a human being. I'm going way way way out on a limb here as Davis carried an entire movie by himself.

Are you really gonna screw with Pixar?

Three are great films. Another has been done, just not in French and another I haven't seen.  My heart tells me it should be Pain and Glory. My gut tells me otherwise.

It's the Globes, so I would not be the least bit surprised if J Lo won this, except she was going for a 'lead' (I know - stop laughing!). I loathed Dern's character, which I suppose was her job.

Best Performance by an Actor in a Supporting Role in Any Motion Picture Tom Hanks, A Beautiful Day in the Neighborhood Anthony Hopkins, The Two Popes Al Pacino, The Irishman Joe Pesci, The Irishman Brad Pitt, Once Upon a Time … in Hollywood

I've been seeing 1917 clips for months, yet no actual movie. I think Joon-ho has the buzz here.

I'm guessing Baumbach (it's a talk-y movie) or Joon-ho/Jin-won (it's original). But I'm hedging bets and going with the former.

World War I. Turn of the century. Britain. HFP.  Done. And Done.

I've never heard (nor will) any of these. Just please don't be Dame Elton. I think we all know it ain't gonna be anything from Cats.

I don't know it will win, but it should.

It will probably go to Porter, who from what I can see from his off show persona is not acting on the actual show. Cox is a lot more subtle (yes, Mike I said 'cox', stop giggling).

I think everyone's over Phoebe by now, no? Maybe over Broshanhan too, but that's where I'm landing.

I wanted to like Paul Rudd's show more. I haven't even seen Platt's.......yet. But I like the concept, even if it does have Paltrow in it.

Won't someone give a Dawson's Creek alum some love ???

I've only seen Bonham Carter's fine performance - though her performance in the Crown season finale was wonderful, but when in doubt, always go with Collette (sorry Meryl) even when I haven't seen OR heard of  Collette's show.

I'd say "hands down", but what the fuck do I know. Culkin has it all over his brother in terms of acting.


So there it is. May the best person - Mike is very gender fluid and I don't know how he/cis/she/they are identifying today - win.

Song by: David Guetta
Posted by Blobby at 12:07 AM

Time sure flies — here it is 2020 already and Blobby puts himself back out there for another humiliation. Yes ladies and germs it’s time for the Golden Globes. This time with an all vegan dinner at the Beverly Hills Hilton. Num-num. I’ll loading up my bacon-cheese fries and hand-rolled sausage balls to watch the telecast and watch the “stars” scarf down their kale soufflé and pumpkin lasagna.

(And I totally digress, but please note for the record that it was at this very Beverly Hills Hilton where I (1) snuck up to see the (unnumbered) door to the suite where Whitney Houston drowned in her tub and (2) got to meet Candy Spelling and Naomi Judd up close and personal. And stand just feet away from the goddess that is Betty White.)

So having seen no movies of note this year (well, i did sleep through Little Women last week), I would agree with Blobby that this is a total crapshoot. And a quick glance through Blobby’s choices — well, some of them are just darling.

Here goes nothing — or something. Time will tell:

Best Motion Picture Drama: Marriage Story.
I made it about 30 minutes into this film. To be fair, it was past my bedtime (7:45pm), so I should give this another shot.

Best Performance by an Actress: Judy/Renee
Didn’t see it, don’t wanna see it. But isn’t this Renee’s comeback role?

Best Performance by an Actor: Antonio Banderis.
I’m not picking this because Blobby did. I did my own research (aka saw a headine on Yahoo.com yesterday)

Best Motion Picture/Musical or Comedy: Oh yeah Rocketman was another film I enjoyed sleeping through this year. For this category, my money is on “Once Upon a Time in Hollywood”

Best Performance by an Actress/Musical or Comedy: Emma Thompson. She’s got the English talky-talky thing going for her.

Best Performance by a Actor/Musical or Comedy: So i’ve never heard of Knives Out or Jojo Rabbit. I will say we’ll swing way back into the archives and give this award to Eddie Murphy because of the comeback factor.

Best motion picture/Foreign language: Sorry Blobby. Copying you, only because Parasite is the only one i’ve heard of. And i saw it advertised on a billboard once.

Best Actress in a Supporting Role. J-Lo for the block (where Jenny lives)

Best Screenplay: Steven Zaillan for the Irishman. Heard a rumor that this film is 3 hours long. A HARD pass.

Best Original Song: Into the Unkown (aka “My Journey into the Sports Authority”)

Best Performance Actress in TV/Musical or Comedy: I would like to say Christina Applegate. The show is funny and her performance is great. Ok, Christina!

Best Performance by an Actor in a TV/Musical or Comedy: I will select Paul Rudd because he is so handsome.

Best Performance by an Actress in Limited Series: Michelle Williams (see above)

Best Performance by an Actor in a Limited Series: Sam Rockwell.

Best Performance by an Actress/Supporting/Limited: For gods sake, no Meryl Streep, please. Her “acting” in Little Women. Meh. In any case, let’s go Patricia Arquette. the Globes love her.

Best Performance by an Actor/Supporting/Limited: The Fonz! Henry Winkler

Look forward to texting with you later Blobby - that is, unless I fill up on sausage balls and it’s past my bedtime. What time do the awards start out in your neck of the woods?

And to be clear, I AM picking Tom Hanks for his role in the Mr. Rogers movie.

glad you caught it bc you were NOT clear - just like all the gauze and vaseline used on camera lenses to make you "look" "younger".

"So by default I'll go with Colman, whose performance I like, but don't love."

What?! It HAS to be Jodie Comer in Killing Eve who was the best thing on all of television last year.

Whenever I heard about the GG awards, I knew Key West holiday was pending.
Sometimes we watched them at KW. I miss these times.