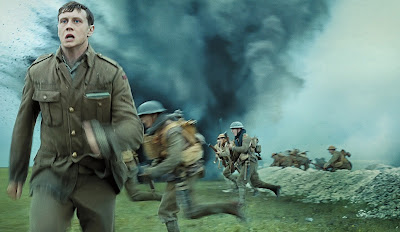 I thought I knew everything I needed to know about World War I.

2.  Thomas Barrow purposefully gets his finger shot off so he can get out of the war and back to being a footman for the Grantham family.

3. Snoopy flew his doghouse in air duels with someone in a Kaiser helmet.

I guess there was more to it. Who knew?

If you haven't guessed, we saw our fourth (!!) movie of the year (or, half-month). I think I low-balled this year's movie goal, but you know they'll be a dry spell in February and March. Our friends David & James told us we must (must??) go see Bombshell, but...........I don't wanna.

And that is exactly what happened!

While I won't get into particulars of the movie, maybe you've seen the previews as often as I have. From the get go, that plane crash coming directly at that scene. DUDES - run perpendicular to the plane, not try to outrun it. Sheeesh. I was just about yelling at the screen each of those 1,917 times.

But, 1917 did get best movie at the Globes, which means it will probably be up for best picture for Oscar - (and it is!), and I need to do my homework if I am (and I will!) beat Mike.   (Jebus, I'm two pages into this post and haven't even really started the review!.  Maybe Mike is right: I CAN go on and on!)

If you break this movie down too much, you might not go - but let me be there to say:  the story has been told before, in some way or another.

The imagery has not.

There is no way 1917 can win best original screenplay. While it is not adapted, it is hardly 'original'. Get a message to the front / save a family member....at the front, etc.  You get it. Yes, you've all see Shaving Ryan's Privates - so you've all seen battle scenes and bodies. This is a war movie, so none of that will surprise you.

Actually, while war is hell, you see some of the effects, but little of the actual war. This movie isn't about that portion of conflict. Still there is some.

Director, Sam Mendes does an incredible job telling that story.

I had heard the entire 1hr:50min movie is one tracking shot. It certainly looks like it, but it is not. Whomever did cinematography and editing should have Oscars coming their way. The effect is amazing, in both technical terms and being in the moment with the two soldiers traveling from their platoon to the front, to deliver the message.

The two main actors are not well known. Mendes pushed for that, as he did not want someone famous to distract the audience from the role (take that Tom Hanks!). Both Dean Charles Chapman and George MacKay do an outstanding job.

The more "famous" actors, Colin Firth, Mark Strong and Benedict Cumberbatch, do nice work as well......for the 3-4 minutes they are in the film.

1917 avoids some pitfalls, while in other regards falls right into others. There are certain lines that are heavy foreshadowing that never arrives. Good for Mendes for not suckering us into that. But on the minus side - and I get it - there are some Indiana Jones-lite scenes. I get the need for action, but......

Oh, and it seems Stormtroopers were seemingly recruited from the German army - circa WWI. Those bastards couldn't hit a thing.

For those paying close attention, the opening and closing of the movie are somewhat bookended, which was nicely done. I had not expected some of the emotion that crept through me at the final scenes - again, a testament to the acting and directing.

Sure, there are some slight flaws you heard me mention above, but as much as a war movie can be enjoyable, 1917 still manages to be a 'good' movie. Acting, direction, cinematography and score. You can kind of overlook the lack of original story. It's a solid A- film.


Song by: Linda Ronstadt & Emmylou Harris
Posted by Blobby at 12:07 AM

I'm only just reading your review after writing and posting my own, although I saw the film yesterday afternoon, my internet connection having been down for 24 hours.
Pleased that you too were impressed by the tour-de-force of filming in the manner it (apparently) was. I've little to complain against in what you say. The nature of the story means that there's no mass armed conflict or even skirmishes, more of peripheral action subservient to the main dynamic of getting through to deliver that all-important message. I was expecting a 'based-on-fact' claim but it made a real change in that there wasn't any.
Yo're absolutely right - a genuine 'A' film.