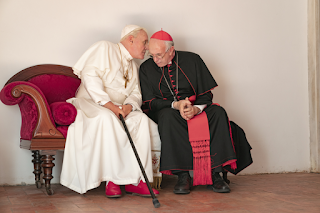 Just due to blog timing I'm already behind in my postings.  Take today and tomorrow for instance: two movie reviews. Yes two.

We've now seen three movies in the first four days of the calendar year, but clearly I'm not timely. And if you think about it, I could be so farther behind, had I taken time to write about BLOTUS and Iran.

Anyhooo.....we did our second theater to Netflix release the Two Popes last Friday.  It may have played in the cinema for three weeks, but not here. It was at the arty theater for one, so we missed it.

The movie itself is extremely well done. Anthony Hopkins as Ratzinger (Pope Benedict) and Jonathan Pryce is excellent at Pope Francis.

I'd say half of the movie is pure fiction, but it's kind of the important half: the meeting(s). These most likely never took place. Any of it.

Francis' life prior to the papacy (and the fake pope gathering) is fairly accurate - according to sources. And this movie focuses on his early life, not Ratzinger's.

The fake gathering exists to tell a tale of two men's differences, even though they represent the same religion, their views are very different. As are their experiences. The story of the film is meant to express this.

The Benedict reign ended during scandal with stolen papers that were printed in the Italian press. You'd think this would (or could) be more of the focal point of the movie, but it's not. There is a highly effective scene of Francis, still a cardinal, giving confession to the pope - and reaction is so well done.

Both Hopkins and Pryce are phenomenal, if for nothing else, their seamless transition and fluency with Spanish, Italian, Latin, English and to a lesser degree, German.  For the first 15-20 minutes, I wasn't entirely sure the film wasn't going to be 100% subtitled.

The locations are amazing, and while I'm assuming they weren't allowed for film in the Vatican, the Michelangelo pieces are great reproductions.

If you get a chance, I'd say check out the Two Popes.

It's a good one. Unarguable.