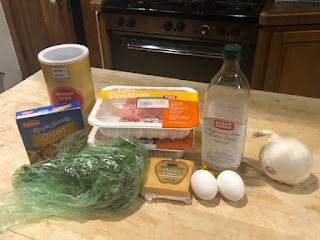 I do miss working from home, but mostly for the cooking aspects. I had more time to be "creative" in the kitchen - or at least try new things. In reality, we have a number of standards, but I'm assuming most people do.

My mother, later in life, loathed making dinner, but just due to not knowing WHAT to cook. I'm beginning to feel her pain.

Cousin Betsy has a Instagram food/cooking page and she touted her chicken patties. For the record, Betsy is an excellent cook, so when I saw these, I'm all like - yeah, I can do that.

It turns out, I can and I can't. But mostly I can.

First off, there are only two of us, so while I followed Betsy's recipe to the letter (well..........kind of), I should have halved everything.

First off, 710 couldn't find any ground chicken at the store, so I told him ground turkey would be fine - and it was. He picked up the Gruyere (or so he claims) and put it down to get a different size but inadvertently picked up smoked swiss instead. The recipe didn't call for that but it worked.

I also only had plain breadcrumbs, but I put some eye-talian seasoning into them, so I'm sure that made everything right as rain. 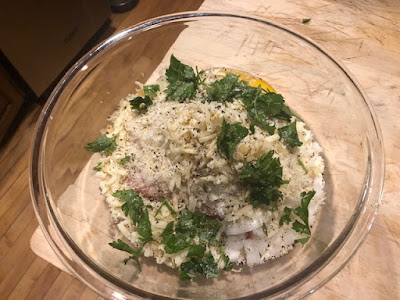 Every ingredient (but the olive oil) goes into one bowl at the same time. Honestly, it felt like making a meatloaf. A turkey one. But patty loafs.

To quote Ina Garten: how easy is that? 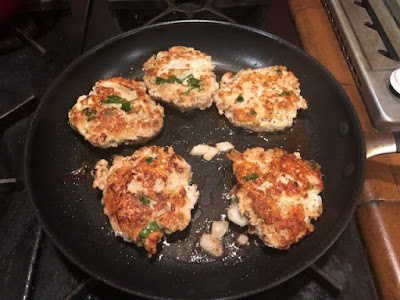 Betsy likes smaller patties. I used a 1/2 cup scoop to evenly distribute. Heat olive oil in a pan and brown on both sides. 2 lbs of turkey made about 9 patties.

That's a lot of patties for two, but the refrigerate or freeze easily, and I used them for lunches - and they heated up nicely. 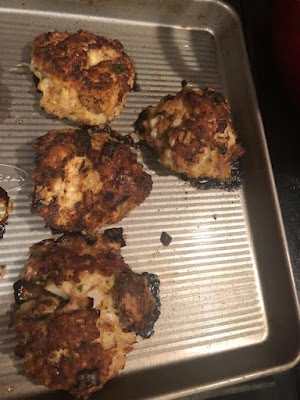 Take out of pan and place them on a baking sheet and cook in a preheated 350F oven for 30 minutes.

If you remember, our stove is ancient. I love but regulating temps is not its jam. So while on 350, everything registered 300. So I turned it to 400 and naturally, it went over that. 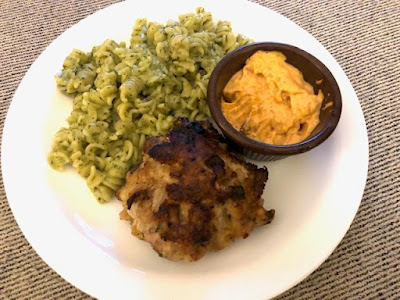 Still, they came out well.

I created a homemade remoulade - made of Franks Red Hot, Dijon mustard, garlic, Miracle Whip (!), and pickle juice. It was great though heaving on the garlic, even though I didn't think that could ever be a thing.


710 love them and would like to include them in our repertoire. I'm good with that.
Posted by Blobby at 12:07 AM

Looks interesting. Changing out ingredients and cooking by concept is a skill many people never master.

Miracle Whip?!?! Why? Why? Why do you even have this in your larder?