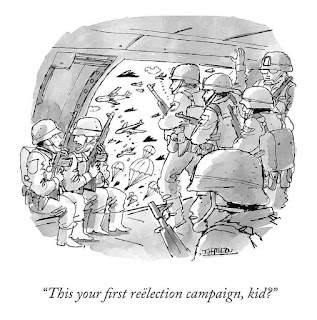 That's how far you'd have to look back since I wrote about anything political (other than inferred references in movie reviews about NAZIS!).

I don't know how to phrase this without looking - um...I dunno.......not exactly unpatriotic..... but I kind of hope Iran wins this thing against us. Sorry, "us".

I have seen a billion (I mean, at least!) people posting every tween BLOTUS sent during the Obama administration's time on how Barack would start a war with Iran to get re-elected.

Well, I DO remember the re-election. I do not remember the war. Can someone send me a wiki link or something to that affect?

1. Impeachment diversion. Obvi. I mean, the timing couldn't have been better and yet, we barely talk about the impeachment since. I mean, I hear #MoscowMitch is moving forward with trial shit, except that he can't. If the House doesn't move the articles forward, Mitch can sit on his hands with both thumbs firmly planted up his butt.   .......which is what I'm assuming most people in Kentucky do on a daily basis.

I thought the impeachment piece would actually keep BLOTUS from a State of the Union speech, but now he can cry 'war' to a joint session of congress with lots of half standing from the lot. No way he's missing out on that - and it can be THE topic of his speech, not any impeachment talk.

2.  The election. I think this move on Iran this far out from the election could actually hurt BLOTUS in November. Should this continue, should there be more troops and U.S. casualties, well........any USA! USA! USA! sentiment could be done for well before we head to the polls.

Remember at the beginning of the Iraq war, and "we" chided France for not aligning with us, and we got all 'freedom fries' on their ass?  Now imagine the White House finds out we have zero allies to assist and we are on our own because oddly enough, even Boris Johnson isn't as stupid as Tony Blair........at least in this regard.

All too quietly, a number of people have left the Department of Defense: 5 people in 7 days at the end of December.  You just kind of have to wonder - what did the know and why was it a mass exodus.

I suppose we won't know that for a while. And yet less than 10 months to the election.

BLOTUS is batshit fucking unhinged and should be removed by the 25th amendment.