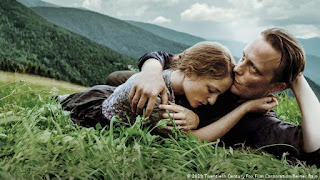 The first two were the Netflix flicks (though they had been in theaters for their allotted time), but we hit up the actual theater with friends James & David. This might be the first time I got to pick the movie - and I was a dicey decision.

I went with a Hidden Life.  This was our third movie in four days. Again, I had other posts queued up.

We'd seen one preview for the movie, but it was another Nazi based movie, but written and directed by Terrance Malick (Days of Heaven, Tree of Life). I internally groaned, but in a way, the preview intrigued me. And as it turns out, unless we wanted to see the 173rd representation of Little Women - Beth still dies, Jo is not a dude, Laurie IS a dude!), our pickings were slim. Cats was not an option.

Movies about 1932-1945 Europe have been done to death (no pun intended) and I'm not sure there are a lot of unique stories to be told. A Hidden Life is based on a true story of a couple who are farmers in Austria (no, there are no singing children). Franz, the father, is called into mandatory service in the Nazi troops, but refuses to take an oath to Hitler.

This does not only set a course for him, but for his family, whose wife (Fani) and daughters, when not ostracized in their small village, they are spit on.

I have tried for days to write a comprehensive review for this movie, and have failed multiple times. I'm taking a new approach - which no doubt will include spoilers, though the blog title itself implies where the movie goes. I'm also confident that, save Raybeard, none of you will venture out to see this movie.

a Hidden Life starts with footage of Hitler and Nazis making their way through Europe. All are in black and white. It flips to Franz and Fani's life in or near the mountains of Austria, farming, and living a quiet, simple life with their children. In colour.

The lush setting I suppose is juxtaposed to reflect where this is a place nothing bad can happen. That is broken when Fani sees / hears a plane and looks up at the sky. It's a subtle shot, but the effect signifies a change for the rest of the film.

The movie will go back and forth between Austria and Berlin. But the pace of the movie never changes. It is done in 4/4 time, so to speak. You will wait for 'something' to happen to change the that pace - it will never come.

The subtext of the movie really is about right and wrong. How one man's ideals leads him to take a stand. A stand which is questioned by all in the movie, save his wife. At least three men ask Franz what one man refusing an oath to Hitler will really do in the big scheme of things.

He gives no answer. I'm not sure there is / was one.

What he doesn't do is use his religion as the excuse, though it is heavily implied and inferred. Franz speaks with both his priest and bishop, both of whom lean toward the motherland, but that is out of fear. But he gets in some great lines:

"If g-d gives us free will, we are responsible for what we do, or what we fail to do"

He also speaks with a muralist at his church, who nicely berates parishioners who view his work:  “They look up and they imagine that if they lived back in Christ’s time, they wouldn’t have done what the others did.”   A-fucking-men!  The then current time tell a different tale.

The role of religion helps Franz after his death. While not an after note on the screen as some movies do, it turns out he was beatified by Pope Benedict - but again, glance at the title of this post.

There are the requisite scenes of the townsfolk sans the pitchforks and torches, but just short of that. One or two of the folks who semi-secretly side with Franz talks about how when pushed, the masks come off to truly show ones true selves.

Those crowds are just as easily Charlottesville or any BLOTUS rally.

That all said, a Hidden Life is beautifully shot, on what were mostly, if not entirely, hand held cameras. There is probably 20 minutes of dialogue, but the movie runs three hours. There is tons of emotion in the silence. The score worked extremely well.

Much of Franz and Fani's words come from actual letters written between the two.

Never have I been to a quieter movie. Not a cough, not a sneeze, not rattle of paper, not a word spoken. Everyone was all eyes and ears for the screen.

It's a very good movie - though not entirely comfortable to view. I don't know if it would hit the 'great' mode, but we talked about little else at dinner.

I'd not heard of this but just seen that it opens here next week. On my new regime of only seeing those films I really WANT to see I'd put the bar up against yet more war films, though it's already being severely tested by my having booked to see '1917' next Tues (we''ll forgive 'Jojo' as being off-piste), and now with this one and your commendation of it looks like my plan is close to complete demolition already. (Sighs "Heigh-ho!")