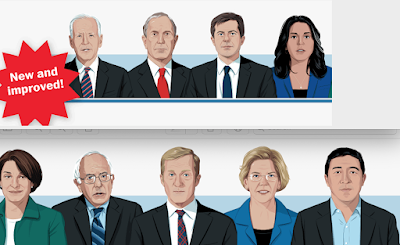 Booker is out. So save Yang, we have a pretty white race. And that includes Warren's Native American heritage.

Truth be told, come primary day, I don't know who I'll vote for.

Of course, truth be told, come March, I don't know which of these nine will remain, though I'm guessing they'll all be on the ballot. Filing deadlines, and quitting timelines and all.

I mean, I know who I'm NOT voting for in the primary:  Uncle Joe being #2 and Tulsi Gabbard being #1.

Steyer would be a tough sell and maybe even Klobuchar. So that really leaves Yang, Warren, Bernie, Bloomberg, and Mayor Pete. But they're not equal in the rankings of my mind.

The Washington Post has a 20 question quiz to let you know which of the candidates agrees with you most. It touches on healthcare, gun control, education, some foreign policy, etc. You know the drill.

Well.........not what I would have thought at the beginning. Buttigieg being the biggest one.

Mind you - with all that said, there are extenuating circumstances with them all - and some of those might override those few things, and rearrange the ranking.

What does yours say?


If anyone is picking BLOTUS (who is not part of this quiz), give me a logical reason why.
Posted by Blobby at 5:10 AM

I am a tie between mayor pete and amy.

and if ANYONE is voting for the dump, FUCK YOU!

I got Warren, who has been my first choice for a while now.

Aware of being an interfering outsider whose answers have no validity as well as having a relative ignorance of what would be practical and what is not, curiosity got the better of me - so for what it's worth I came up with.....Warren.

RB - if the Russians and Ukraine can interfere, certainly we will take UK interference. Though - Johnson?? Let's hope you do better with us.

Fair point, B, though in terms of being a walking disaster our BoJo is running your BLOTUS close. :-(