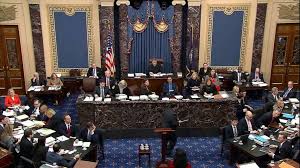 If you hadn't noticed, save for a small John Bolton comment in yesterday's post, I've kind of been avoiding anything Senate - Impeachment related.

Emotionally, I can be all over the place on this. And by "all over the place", I mean utter despair or glimmer of hope. Those are really the only two things out there for me politically. No real in between. And let me tell you - it. is. exhausting !!!

I'm sure if I made an appointment, got pre-certed, paid my co-pay and got on Dr. Spo's couch, he'd diagnose me with PTSD.

I know it is dangerous for patients to go diagnosing themselves (thanks WebMD!), and while I am not a boarded behavioural health specialist, I believe that since November 2016 I am living post-trauma. ....and I'm not sure I am even kidding.

This last week of highs and lows regarding this mock trial is infuriating. I did (and do) still think it's a GOP sham - from #moscowmitch to Susan Collins. Even Romney's words of having witnesses falls flat. If course, I never thought you could believe a word from his mouth.

But then John Fucking Bolton has seemingly been holding on to a huge tidbit of information that he'd rather save for his book than for his country. So - clearly mixed emotions:  info that could really bring down BLOTUS vs John Bolton's idiocy vs #moscowmitch now knowing there is actual cooberation to the charges and still wants no witnesses and still wants to move it through at lightening speed.

And now you don't have to wonder why I feel so fucked up with all of this.

The current ray of light is that as of 21:05 yesterday, #moscowmitch doesn't think he has enough votes to block witnesses.  Praise be.

But I'm going to bed in a few minutes, so who knows what the news will be in the a.m. And who knows if Bolton would even testify, and if so, to what would he testify.

I think of Whitewater and Susan McDougal, refusing to testify to the republican run House and given 18 months in prison. The democrats were weak with the dozen folks who refused to testify. Not one held in contempt. WEAK.

This whole thing of nothing sticking to BLOTUS has really got me bummed out. The news as of late for the democrats running has been nothing but bad . They certainly can't play nice and will come back to bite them all, and in turn anyone looking to overturn the White House in 2020.

.....maybe it's time to up the dose of my antidepressant.