We are the Champions 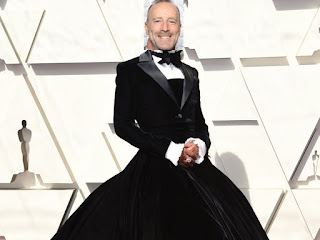 Mind you, I was a willing participant in the exchange, so it went on for a while - or seemingly did.

He was in the car with his husband and since the dog was asleep, I have a feeling he was just bored with Peter after a long weekend away, so I got the attention.

Mike pointed out a flaw in my selection post, of which I was kind of aware. In two areas I changed my mind before I ever posted, but duplicates were still highlighted. And while I made said changes, the edits did not take - nor would they after several tries. But to him, this has already cast a pall over the validity of the Guessing Game.

Mind you - if HE wins, there would be no issue.  Naturally.

Our selections were separated by seven categories - which might be a record number.  It is usually four. This, in theory, leaves us a bigger margin by which to win............or lose. The margin ended up remaining razor thin - unlike Mike.

While we are both winners in our own way - in terms of this contest, I AM the champion.

That seven spread, of which I spoke, meant nothing. It came down to best Score - fifth from the last category, and even then, the best Mike could have done was tied. Ironically, we both lost that category.

Mike gave me a hard time (I know, right?) about bailing before the end, but as the victor, I could kind of do whatever I frickin' wanted.  So come the spoils.  So yes, I missed the Glenn Close upset. Even in my forecast, I said Coleman should get it, but I didn't base my choices on sentiment, like I so often do.  I don't think it helped her case that Close came dressed AS an Oscar.

And riddle me this - is ANYONE more annoying or self-important in Hollywood (and that's saying something) than Samuel L Jackson?  And yes Bob, I'm including Gwinnie in that group.

And poor Maya Rudolph.  Helen Keller comes back to life just to be her stylist for a day. 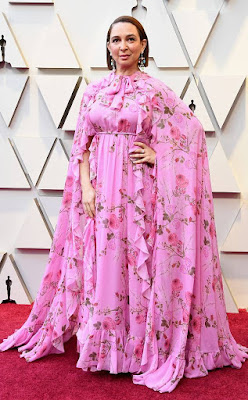 As I told Mike - Maria von Trapp couldn't have repurposed those drapes into something wearable either.

Don't start me on Gaga. I don't get the fascination with that song, but I did find it interesting that she wore ear monitors to keep her on pitch, while Cooper did not. I think that says more about him than her.

And Midler. Her voice is fine - as she is 70+ now. But the dreadful saccharine song of zero substance was just well..........dreadful. I would have loved to see Gillian Welch win, but we all knew that wasn't going to happen.

But back to going to bed early. The Oscars were both boring and better than before. I loved no host and no stupid schlock bits that drag the show out.  ...and the horrible horrible "jokes".  Yet, the show was kind of boring too.  I'll take boring over dragged out.

As for my win: we agreed on a firm handshake and joining us for dinner next time we're in town - which could possibly be next month.  As he had to pay for nothing but his time, Mike readily agreed.

But for the auditors and Dewey, Cheatham & Howe - the breakdown is here:

Congrats! (perhaps to the both of you?)

Jackson was a bit too much. Maybe too much cocktails waiting to go on?

Well there is so much here, so let me just chime in in random order:

The photo selection is wonderful. So many folks, even my biggest fans, said I could never pull of a hoop skirt. I guess I showed them and kudos to Billy Porter for wearing whatever he wanted. But I found him completely unwatchable. The few celebrity “interviews” he “conducted” made it painfully clear that he had nothing to say. Was he a last minute replacement who had no time to prep?

Yes I will give Blobby the credit he deserves - he won fair and square. I am curious who helped him though - it’s not like he’s been able to pull this off before. Who knew it would come down to Best Score? And why oh why did I stray from Bohemian Rhapsody for both editing awards?

Re maya Rudolph. Who wouldnt love to have her as a neighbor, frock aside? I mean, she is the best and funny. I didn’t miss having no Oscar host, but if the powers that be decide they need tomhave this shindig hosted next year, my vote goes to Maya. Or Blobby. Can you imagine?

I agree (see? It happens) with Blobby about Bette. Lovely tone, horrid song. And that Jennifer Hudson yodelfest? Yeesh...

I look forward to sharing a handshake (firm - Blobby should study up on how to do that) and a martini (he knows how I like ‘em) to celebrate Blobby’s win at the Oscars, and oh yeah, the Golden Globes. He does seem to conveniently forget about my blowout at last fall’s Emmy awards. And I think he was too scared to even challenge me to a contest on the recent Grammy Awards. He knows how much of a musical genius I am.

So a hearty and heartfelt congrats to Blobby on this miracle of miracles. I am so very proud of his eagerness and modesty.