I Could Write a Book 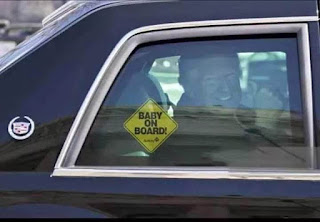 I mean, I do - but I'm not writing about BLOTUS and his fucking national emergency. It's not like we didn't see that coming.

The only takeaway is Pelosi's pseudo-threat:  a Dem, when (and IF) in the oval office can use the same tactic for gun violence.

Still not a Nan-fan, but she has bigger balls than Paul Ryan did.  Well, so does Shep, and his are cut off.

The prob with Pelosi's "threat" is that it could backfire. It might temporarily scare the sitting GOP, but it might incentivize these turds of voters to go back in 2020 for BLOTUS.  Sure, they're seemingly PO'd about their lack of tax refunds - they're more afraid their AK-47s will go away.

Well crap. I just wrote about something that I said I wouldn't.

Song by: Frank Sinatra
Posted by Blobby at 12:01 AM

The photo is worth a thousand words. I laughed.
Cheeto needs to be vanished to a McDonald’s in the middle of the desert.
Nancy has more balls than the whole GOP and the only thing I’m mad about is that she did give Cheeto money for the fence. I cackled when I read it was LESS than they offered lastt, though.