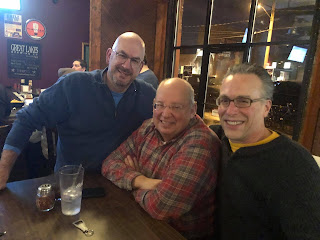 I don't even care about the commercials.  And lord knows I don't care about Adam Levine.

Yes, you can say "Maroon 5", but other than their mothers, I dare you to find anyone who knows the name of any other band member.

All I can say about the game - for what little I watched - is that Levine is never getting buried in a Jewish cemetery.

In actuality, I saw none of the game, though it was on the entire time.

A college friend messaged me two days before saying a few guys were meeting at his restaurant / bar and wanted me to come down and join.

Normally, this is something I'd probably say 'yes' to, and then end up begging off the day of. I love Lester, but you know - it's a Sunday night.........and blah blah blah.   He'd be fine with 710 attending too, but my fraternity brothers are so not 710's scene.

Anyhoo....Lester purchased his uncle's business a few years back. He runs it from afar, but comes to town every 6-8 weeks or so to check on it. I see Lester enough that I didn't feel the need to have to have to have to go. But he mentioned Greg was coming as well.

I had not seen Greg in 3+ decades.  It seems of these fraternity guys, I see another one every year or so, plus a core of like six. But I wanted to see Greg - not only because I liked him, but he is the one who helped get me my first job in healthcare.

Like it or not, he helped set me on my career. It turns out he did the same, though he became a doctor. Sure, he's a D.O., but that's still impressive.

I employ a number of D.O.s and they're great docs.

Greg looks eerily the same as does his wife, who back then was only his girlfriend.  They've been together as long as 710 and myself.

Oddly enough, we didn't talk about the past that much. Lester and I have already rehashed that over the last few years. But right before this picture was taken - and I shit you not - we were actually talking about the singularity.

Well Greg and Lester were mostly.  I just finally chimed in that I was not high enough to participate in the conversation.  Two beers and one shot were not enough to make me go "oh wow man, that is SO deep".

It was fun to see them and catch up. It turns out Greg lives in the area and has for the last 20 years. I just never knew it.  We said we'd get together, but I'm not going to hold my breath or anything.

Adam Levine? Who he? (It's okay. Just googled to fill in my ignorance.)