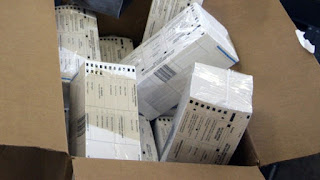 Why is it the GOP who screams the loudest about voter fraud, when they always seem to be the ones at the center of it?

Is it the more guilty just try to throw folks off track from their own dirty deeds?

Occam's Razor and all.

I think the most surprising thing about North Carolina's current scandal of illegal ballot tampering, is that it is not getting more (any?) attention.

I guess the word 'illegal' is redundant here.  I can't think of any legal ballot tampering.

What I think I love most about this - a son of a Republicunt congressional candidate warned his father about hiring a person who had a bad track record when it came to working on the up and up.  Dad hired anyways.

The son? An assistant U.S. attorney.    The son? Testifying against his father.

A religious republican hypocrite?  I'd say they were just a myth if they weren't such a cliché and so prevalent within their own political party.

I know a guy like this can justify his deceit in terms of religion and the need to win, I just don't know how.

The guy's tears as his son testified moved me not at all.  As an early Jon Lovitz character might say: "ACTING!"

But please, by all means, tell me again how having a national holiday for elections tips the scales away from GOP.

Will be an interesting Thanksgiving dinner if Dad's Parole officer lets him go.

Religious Repug lying is as common as the light of day. Nothing to see here, folks. We've grown so absolutely numb to their brand of f*ckery that we don't even blink when some new fresh hell pops up.