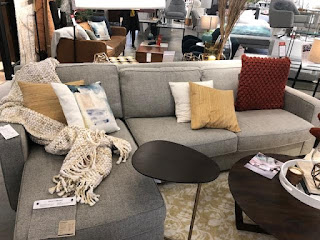 I loathe buying furniture. Oddly, it's not because of the cost - but the indecision on style, etc.

Still, it's come to a time where we need a new sofa.

I have zero idea how long a sofa is supposed to last. One of the ones we have now is 14 years old. It's had its time, right?

We've looked here and there, but I kind of forced the issue last week. During a bitter cold day where the dog couldn't really go out - and with no movies left on the list to see - I got us out for the afternoon, and we hit 5-6 furniture stores.

It turns out, that is like museum fatigue to me.

The last two sofas we picked were seemingly good - and from a great reputation store, but I ended up disliking them. And they didn't quite hold up.  Yes, you think 14 years is long (and it is), but I've been moaning about it for a good four years.  I'm just too lazy to do a thing about it.

We ended up liking 2-3 of the two dozen we saw. Yesterday, I re-pushed, and again we went out and made a selection. Of course, as 710 was working with the clerk, I started having doubts, but then said "fuck it" and stuck with out original selection.

The sofa selected - a version of what you see - is perfecting serviceable. And reasonably priced. Enough so that if it doesn't work out or only lasts 3-4 years, it will be fine.

We debated (well, discussed), the chaise part. Shep would love it. But other than that, we saw no need. So it's a standard 76" sofa.

I think all will be happy.

Email ThisBlogThis!Share to TwitterShare to FacebookShare to Pinterest
Labels: Furniture

We recently went through the same thing. 14 year-old sofa that just wasn't cutting it any more. We got one similar to the one in your photo, with the chaise. Ken sits at the "normal" end reading his tablet while I stretch out on the chaise, under a blanket this time of year, watching tv. The dog sits in the middle spot. Ours is blue, from Ikea. Did'ja ever assemble a couch? It's not for the faint of heart. But it all comes apart again (including the fabric) for easy moving/cleaning(which I've already had to do - new sofas are a magnet for stains, old ones, not so much).

I have a 30 year old sofa from "this end up"; it needs new cushions, but the wood is in great shape!

1 - 2 weeks?! What kind of sorcery is this?! We just went through the same process - both with the living room couch and a chair for the library and they both (from different sources) quoted "about 9 weeks".

Greg. We went with the standard stock. Any different fabric or colour boosted time from 2 weeks up to 15, or something in between.

And I'm not holding my breath on 2 weeks, let alone 1.

Congrats on the new sofa. 1-2 weeks is great timing but there will be another week for delivery and then you will need to be there to meet it. Most of the time it's 9-12 weeks so the clients forget what it even looks like until it arrives. Sophie will thank you.

We are quite overdue to buy new furniture, which is put off as I too dislike the buying process. I am content to go one place and see three things and pick one.