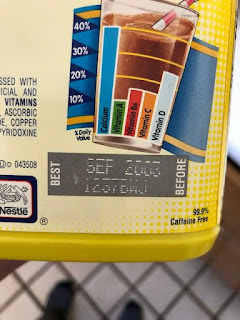 As we have transitioned my mother into independent living, we have other things to tidy up.

Right around the holidays, I kind of panicked and wondered if anyone had tossed the food out of my mother's cupboards after she had gone into the hospital in September - never to return.

My sister confirmed she had taken care of the fridge, but nothing else. So, 710, Shep and myself went over and started with the pantry.

Ruckiry (not Jon's boss), the medicine shelf had been cleaned out. That was always like Russian Roulette.  My dad would combine things - tylenol and motrin in the same container. Who knows what you were getting, what lot number or expiration dates.  It was all about conserving space - though they always had plenty.  (Don't even ask about programs he deleted from computers because they took up 'space'.)

The food sitch wasn't much better, as we would soon find out.

The latter was due to things already being opened, unwanted by anyone ever or items that had been expired.

Now, I'm not saying my mother was attempting to poison us at every single Sunday dinner, but I'm not not saying that either.

My LORD, the expired things in her cabinet. And not by weeks or months. That she used !!!  Granted, the pic is the extreme - and who was really using Nesquick anyways?  I'm sure it was bought with the grandkids in mind, some of whom are already out of college, the rest about to enter it. But I did have to laugh at the 2003!

It took us way longer to clean out the pantry, one cupboard and the freezer then anticipated. We'd have kept going but her big-ass trash bin was full.......and now weighted like 200 lbs. Thank g-d it was on wheels.

The Cleveland Food Bank got a three nice big boxes of fud donated to them. I hope the stuff went to good use.

We still have like the spice cupboard to go. But that won't take long.

What we are ready to do now is get the house ready to put on the market.  That's another post altogether (c'mon Airplane fans..........you know what to do!)

Song by: the Rolling Stones
Posted by Blobby at 12:13 AM

Waste not want not. You never know when some Nesquick might come in handy! Also best before dates are a corporate scam.

gah, my in-law's house was like that too! and not only food, but general junk. plenty of general junk went to goodwill, the unexpired food was divided between my spouse & his brother, the expired/opened stuff was tossed. my in-laws were pack rats, as is my spouse.

And thank you, Jon

good for you; you are a good son.
I often hear this tale viz. clearing out the cupboards of our elderly loved ones to discover things old as time.