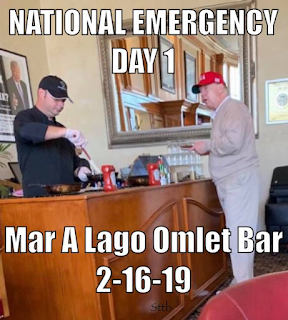 The only Emergency I want to see has Randolph Mantooth and Robert Fuller in it.

This declaration from BLOTUS is a joke - to so many.

I get I fall on the liberal side of things in many ways. But to me, this isn't a liberal thing - it's a logical one.  I totally understand that with this administration, logic, facts and reasoning have zero to do in the determination to "build that wall".

Ironically, BLOTUS is looking foolish so he can not appear to be foolish for not getting said wall.

Media and legal experts expect a potential SCOTUS will end up ruling on the legality of this crisis during the 2020 election cycle.  That could just as easily work against "us" as it could for.

But the actual scary outcome of this whole thing?   Ann Coulter's tweets.

Not the tweets exactly, but that I'm AGREEING with her!     FUCK. 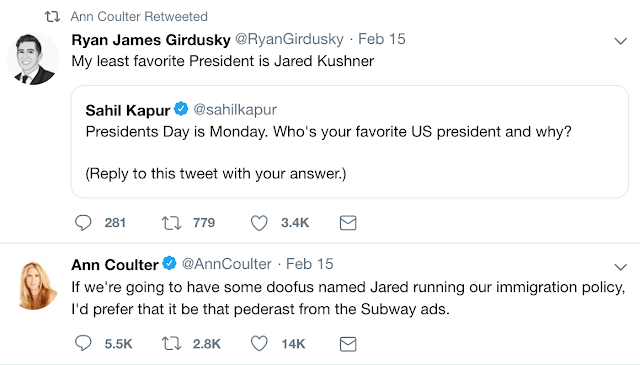 I can't even argue with that one.


But I saw the below, and it's just a little more succinct than what you hear in the spin that is coming from the White House or even the lamestream media. 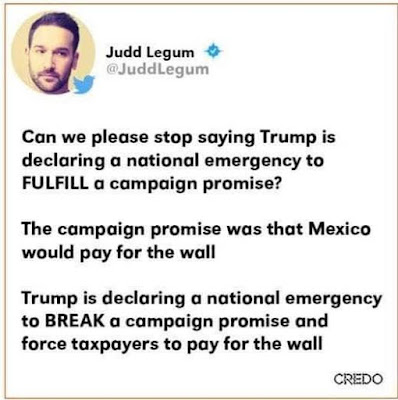 Yes, all the big new orgs have been incredibly lame. NBC, last night interviewed someone at the Texas border - a GOP town "official" - who insisted they need a wall there.  This was after the same reporter (with the last name Gutiérrez) reported that apprehensions in this area were at a 20 year low. Nowhere did he bring this to the official's attention to get justification for the barrier, other than his political party.

You're "reporting" sound bytes, not news. While I cannot stand listening to anything BLOTUS or his cronies might say is A reason I have limited my news intake, it's not the only reason. If the mainstream media is only going to chatter about the talking points put in front of them, why even bother - the other side has won.

For all the shit CNN is given, I will give them this - they prod. Not enough and not always at the right things, but half the shit on their website I'm sure it to poke the bear. The others just try to keep the peace in hopes they don't have access cut off from them.

Song by: the Tragically Hip
Posted by Blobby at 12:03 AM

I was partial to Kevin Tighe, myself. ;)

I h8 the cunter. and I never watched "emergency".

Sometimes I Think CNN is the only thing stopping us from doing down.