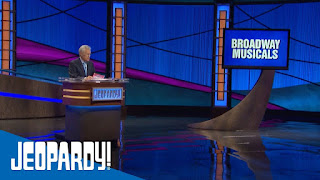 I would say most weekday evenings, we turn on the tv in the evening to watch Jeopardy.

Alec Trebek kind of annoys me, when he insists on over pronouncing certain words, or when he puts on accents.

Or when he comments, chewing up precious time he takes away from the contestants.  Dude - you're an emcee.

I don't get Jeopardy on some levels. Sometimes they let answers slide, when they clearly shouldn't and sometimes they ding. Show some consistency people.

And I always treat Final Jeopardy the same way - by picking my wager (all or nothing) based on category (psssst, Broadway Musicals -all!   Mythological characters - nothing!) and selecting my answer question before the commercial break - which is before they actually read the question answer.

If the category is 'Poetry', chances are, Elizabeth Barrett Browning is my selection well before the Gold Bond Powder commercial is even queued up.  Last night the category actually was Broadway Musicals, but my selection of Finian's Rainbow missed the mark.

Oddly though, you'd be surprised how often my shoot-from-the-hip answers are actually correct.

I mean, sure it's 0.03% accurate, but that's better than I'd do hearing the actual clue.

I loved the greg kihn "jeopardy" video, along with its weird al yankovic counterpart.

and pat sajak is a GOPrick.

There's hardly a night that I don't cringe at something Alex says, whether it's in the "interview" of the contestants, or in the playing of the game. I know he's very associated with the show but it's time for a new host.

And I didn't get the answer, er, question to last night's final clue until I sang the whole rhyme out loud.

I miss Art Fleming, may he rest in peace. Yes, that's how long I've been watching Jeopardy. I agree totally about Trebeck.

Trebeck is a pretentious douche bag second only to that guy Buzzy who unfortunately keeps winning. I may be too involved and need to back down.

I LOVE Buzzy. Though I'm looking forward to seeing Austin this week. And Deedles, I loved Art Fleming - he took no prisoners. And I was a wee lad, for sure, but I know him well. Greg- I missed it too, but then again, I had already guessed "Finian's Rainbow'.