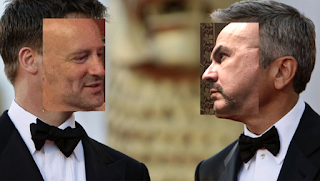 I'm tellin' ya, if I worked twice as hard (or even half as hard) at making selections for the 8th Annual Academy Award Guessing Game® as I did on making an image to go along with this post, I'd have a lot better chance at winning.

This is harder than it seems (that's what she said!).  Seeing a bunch of the movies that are nominated should make things easier, no?. I think it complicates matters. But here we are at the day before, and I'm still grappling over my selections - over thinking everything.

I don't feel as confident as I should after my huge Golden Globes win - for which I have yet to see my prize.    ........I'm just sayin'.  I'm sure Mike is just waiting for the right time, with just the right token of my superiority.

But while we wait for that to arrive..........on with the predictions.

I saw five and it's not giving me a leg-up. Roma could be it, but it might be best Foreign Language film. I am thinking it won't be both.

A. I want King to win, just because I like her.  B. Stone and Weisz each have a statue and I think they'll cancel each other out. C. Adams was ok, but the movie isn't going to win anything big that might not be Bale. D. the chick from Roma wasn't stand-out'ish enough / at all.

I like Ali. I didn't see this movie. I'm not sure he needs another one so soon after his last win. I think it should go to Grant - and Driver, if not Grant.  But word on the street is: it's Ali.

I'm truly hedging my bets here. It could just as easily be Cold War or Shoplifters.

A movie about Nazi sympathizers in the '30s should resonate in this current time of fascism.

It's a liberal crowd. I think Free Solo might be better, but this is for the win. It doesn't matter what I like.

Gag-Gag will get her Oscar, but not in acting.

I so want it to be Isle of Dogs.  I am getting SO tired of anything action hero and Marvel related, but it will be Spidey.

ADAPTED SCREENPLAY "The Ballad of Buster Scruggs" "BlacKkKlansman" "Can You Ever Forgive Me?" "If Beale Street Could Talk" "A Star Is Born"

Roma had a subtle story and little dialogue. Vice was good, but an unpleasant topic. the Favourite was the most original.

I'm not saying I'd agree with the win, just that he will. I thought Bale was amazing. And the Academy loves bio pics shit (how else do you explain Jamie Foxx having an Oscar?).

ACTRESS IN A LEADING ROLE Yalitza Aparicio, "Roma" Glenn Close, "The Wife" Lady Gaga, "A Star Is Born" Olivia Colman, "The Favourite" Melissa McCarthy, "Can You Ever Forgive Me?"

Sorry Gag-gag, it's not happening.  This is coming down to Coleman (whom I think should get it) and Close (who I think will get it) after decades and decades of snubs. She's the Susan Lucci of movie awards.

I am the Susan Lucci of award contests.

While I oddly think it should go to Lee, it's going to Cuarón.

I might be the only person on earth not to have seen this movie. I believe they'll give it something.

They were elaborate and still a little off kilter here and there. I'm probably getting it wrong for Black Panther, but it's a chance I'm willing to take.

Are there ever separate wins for Editing or Mixing in sound?

Truth be told, it's the only one I've seen. Each Pixar movie has a short at the beginning. It can be argued, those are usually better than the full length feature. "Bao" is no different.

I have no idea. Solo kind of bombed, so I say give it to a movie in which Ryan Gosling appeared but won't win anything for himself.........like La La Land.

If for nothing else than the Live Aid sequence.

If you haven't seen Bale's transformation into Cheney - you should. The guys responsible for this were incredible.

I haven't seen Mike's picks yet.  I dare say he waits to see mine to cheat off me and makes a tweak or two. It could be easier if he still wrote his blog and we agreed to upload our posts at the same time. But how could he win that way?

*I really need to purchase and learn Ye Olde PhotoShoppe

Still never got to see 'Roma' as, after its initial short art-house cinema release for all of about 4 days (evenings only!), it's not come back to theatres (as yet?). Something to do with its having simultaneous Netflix release where, presumably there's more money. Will be doubly infuriating if it does win Best Pic.

Well this year's Oscars really snuck up on me. I'm still licking my paws after my much-unanticipated loss to Blobby at last month's Golden Globes. I guess that just plain old odds would predict his eventual victory. After all, if you put enough monkeys in a room filled with typewriters, one of them will eventually pound out "War and Peace". But I'm not bitter, just happy for my friend.

I write these pearls as the passenger in a car headed on a rain-slicked highway up to Boston from a weekend in Wilmington, DE. SO with only coffee and a few bites of a hardened egg and cheese muffin in my system, may I present to you my picks for this evening's Oscar telecast. May the best nerd win.

And by the way, I am making these predictions without seeing what Blobby picked first. So the order of the nominees may not exactly follow what's posted above. Boy, is the tabulating committee from Dewey, Cheatum, and Howe going to struggle with sythesizing this ballot!

Best Picture
Well, we saw three of the nominated films: Bohemian Rhapsody, A Star is Bored, and Roma. Bohemian Rhapsody was good, I guess. I blame those comfy reclining theater chairs for making me miss the first 20 minutes or so of the film. Guess I was tired out from sitting through all of those previews. Bradley and Gaga carried the movie, I supposed, but "Bored" didn't seem like much of a stretch. I mean a rock star playing a rock star? So that leaves me with Roma -- a beautiful black-and-white feature that only caused me to doze off once (or twice). Having seen nothing else and not liking to talk about something I know nothing about (ha!), I'll with Roma for the win.

Best Actress
Glenn Close. Didn't see "The Wife" and I'm hearing from my secret source that this win is going to be more about career achievements than this actual performance, I'm OK with anything that keeps Gaga away from that podium for acting. She can have her award for "Shallow".

Best Actor
Rami Malek. Seems like a nice enough chap. I do have a concern that the Academy may throw Bradley Cooper an Oscar bone for acting since he was ignored in the Directory category, but my fingers are crossed that the big Queen will take this one home.

Best Director
And speaking of Directing (which I've always wanted to do), let me just say two words: Alfonso Cuaron.

Best Supporting Actress
Regina King. Having earned her acting chops under the wings of Marla Gibbs and Jackee Harry in "277", Ms. King will knock this one out of the Oscar park.

Best Supporting Actor
The lecturing tone I gleaned from just seeing the trailer for Green Book makes this a "must miss" movie for me. But prevailing wisdom says it's going to be Mahershala Ali in this category. And I feel pretty confident because Blobby says he's issuing a write-in vote for Rami Malek's fake teeth in this category.

Best Original Screenplay
I'll go with The Favourite as the favorite here.

Best Adapted Screenplay
It's Spike Lee's year -- let's go with BlacKkKlansman here. And was there really a movie called "The Ballad of Buster Scruggs"? Who knew?

Best Animated Feature
Much to my chagrin, Spidey beat out the unbeatable (I thought) Incredibles 2 at the Golden Globes. So I am taking no chances here. It's Spider-Man in this category.

Best Documentary Feature
This one's hard. I'm hearing some buzz for Mind the Gap, which I have no clue about. But I will go with RBG, everyone's favorite little Supreme Court darling.

Best Production Design
Let's give a little love to Black Panther, shan't we?

Best Costume Design
The prize for costumes always goes to movies about royalty and queens, doesn't it? Not this year, dear readers. It's Black Panther.

Best Makeup and Hairstyling
Vice. I would say the work on Christian Bale is crazy good, but aren't we all starting to look a little bit like Dick Cheney?

Best Sound Editing
And we have lift-off. First Man

Best Short Film - Animated
For god's sake, what to do here? Bao

Of all of these, I've only seen Black Panther, so I won't be watching.