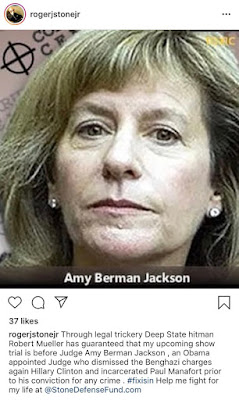 Roger Stone has deleted this tweet of the judge who is overseeing his case.

I snagged it and am posting it here so it lives on forever (or until I stop paying for my domain name).

He's a dick and he knows it. Though I'm thinking, everyone knows it.  I'm guessing the judge knows it.

Not the gun site to the left of her head.

Not unlike his butt-buddy friend, BLOTUS, the idea of using threats or implying others should harm those who oppose (or make fun of) them is not new.

Actually, Sarah Palin used the gun target years ago - and while it was a threat, what a change 5-7 years makes. I have no doubt someone will take up the cause and harm (or try to) this judge or Alec Baldwin.

If you didn't see, BLOTUS got his widdle feweeings hurt at a SNL skit - and the word 'retribution' showed up in his tweet.

I mean, you know there is some MAGA-buttfuck who would be more than happy to stalk and take a shot at Baldwin......and just because of that tweet.

BLOTUS also thinks NBC should have their license revoked due to their mockery.

My lord - what a thin-skinned pussy.

I mean, he's such a pussy I can't believe he hasn't grabbed himself.

Honestly, I hope Stone has an additional charge coming his way:  threatening an officer of the court. A FEDERAL judge.  Whether he's convicted of his other charges, this one might actually stick.

judge don't take no shit from no white man! she also told stone to STFU, something he is not capable of doing. so throw his ugly ass in jail NOW!

Like with Manafort continuing to commit crimes after being indicted, these guys are so pathological that they can't help themselves - even after they're already in the hot seat.