In 2000-something Barak Obama allowed Pride flags to be flown at U.S. embassies around the world - as long as the flags were smaller than the U.S. one, and flown below the U.S. one.  Seemed reasonable.

In 2018, Mike Pompeo declared it a no-no and repealed the act.  You know who and Miss Pence backed him up it because: gays.

But since I said this blog would have more good news, there is a positive spin on all that shit: 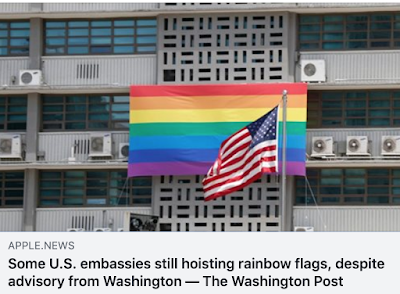 Way to fucking go 'some U.S. embassies'.  For the life of me, the WaPo article doesn't state which ones, other than Brasilia doing something or other with Play Dough in rainbow colours.

I was hoping for more resistance from you know, the German embassy, since the dude is queer. But he's a BLOTUS appointed queer, so............I guess I shouldn't expect much from that.

Maybe the Post isn't posting which embassies are not compliant, as to let it run its course with the flags, knowing that the State Dept can't be watching all of them at all times.

A boy can dream.

IIRC, the pix you show is the embassy in south korea. FUCK THIS BIGOTED DICTATORSHIP!

let us hope so