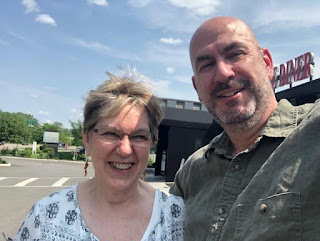 I took a drive for the day to my old stomping grounds - Columbus - for a lunch.

A four and one half hour lunch.

My old former boss and first mentor, Phyllis, is retiring from THE Ohio State University (yes Spo, that is the way you say it!) after about 40 years.

Unlike most of my other jobs, I haven't really stayed in contact with my other bosses. I've run into some here and there, but haven't gone out of my way.

I have tried to make time for Phyllis once every other year or so.

Since knowing her (starting in - gulp - 1989), she has almost always had a plan for the beaches of North Carolina after her retirement.  Plans change. To a degree.

Phyllis and her husband will be going to NC, but more inland, where their daughter, son-in-law and brand new grandchild reside.  Should they leave in mid-June, this would be our last chance to do this get together.

We shall get other chances, I would assume. Where they are moving to is the same town that 710's sister lives, so when we visit there, I am sure I can steal away for a meal or drink with her.

So 4.5 hours is kind of par for us anymore. We catch up via email here and there, but it was a good sit down to yack, as we have a lot of history and commonalities with aging and ailing mothers.

I felt bad for the poor waitress who couldn't turn over the table due to us. Mind you, it's not like it was anyone was waiting for the table, and I was a mensch and tipped 40%.

A chapter of our lives is closed. I'm sure we will remain in contact, but it won't be the same, nor should it be. I am envious of her ability to retire and go somewhere she wants.


Song by: Widespread Panic
Posted by Blobby at 12:04 AM

a 30 year friendship is a rare thing these days. the location may change, but the friendship will survive.

No one says THE. If it is mentioned at all it is a THAT