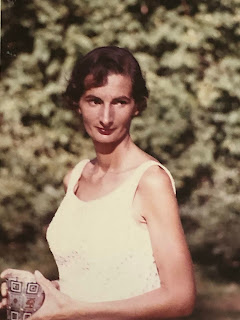 I've held off on this one for a week now, but my mother died last Sunday.

It was unexpectedly expected.

While she had been ill off and on for I'd say three years, she never truly recovered from a hospitalization she had last October.

I'm trying not to blame Spo for my mother's death, but as I was having b'fast with he and Someone when I found out she was taken to the hospital - well, it clearly adds up to his fault.

But that admission just kind of cascaded a few other rounds of setbacks.

So this last Sunday, she and I met with the nice folks from the same Hospice organization that took care of my father. She opted to be cared by them as well. We figured we would have a few weeks at their facility where people could come by, etc. I notified all my sisters of the fact and left my mother so the staff could get her ready for discharge.

I had barely walked in the door from that 20 minute drive for door to door, when they called to give me the news.

As you'd expect, I was sad at the news - and still am - but unsurprisingly (well, maybe not to all of you), I went into work mode.  I made calls to my sisters, my mom's nephew and nieces, I called any number of my mother's neighbors and friends, including her bridesmaid, who yes, is still alive and kicking it too.

I called the funeral home as well and started that process.

As it was a Sunday, there was not much else to do - well, that could be done. But those tasks kept me busy and occupied. The hardest and most emotional part was telling 710, who had been working out in the yard and missed all of this.

So, while sad, I was also at peace with much of this. I had spent a lot of time navigating my mother's health needs since my father died almost five years ago. I was well-equipped to handle the news, just for my being there for the gradual decline, the fact that I had been at the hospital almost daily since her last admit, and my chosen profession.

There is also the unknown, but assumed. It is my assertion, that once she opted for Hospice and she knew I was comfortable with her decision (I had been hoping she would but wanted to have it be HER decision), I think that was it for her. She knew she would go.

And true to her word - she waited until she was alone. Weeks before she told me she would go when no one was around, meaning any of her kids.

Yes, I had some qualms with the hospital and funeral home since then, so in a way I am still coping by doing tasks, though many of them have switched over to one sister who is the executor of the estate. I handled the medical portion.

And this last Friday, we cleared out her independent living apartment. They were "nice" enough to give us 30 days, but we had it finalized before the end of the month.

My last planning is her celebration of life. It will be more up than a memorial and way more up than a funeral. The beauty with that is, you don't have to do it immediately. People can be in better frames of mind. I'm hoping it will be nicer and less emotional.

I'll probably have a follow-up to that, but I won't eulogize my mother here.........not now. Maybe in a few weeks.

Thanks in advance for all your thoughts.

Condolences. I think those glasses are pretty neat-o. Will you save them?

my condolences, blobby. you did everything you could for your mom. interesting glasses.

So sorry for your loss. It sounds like she went on her own terms which is all we can hope for. I'll raise my own mid-century modern tumbler (gold and black) to her.

I am so sad to hear this. Take time, and take care of yourself. Allow yourself to feel what you feel.

So very sorry to hear of this, B., a unique event which will be with you all your days, though I do hope you'll be able to put much of the pain behind you and manage to think more of only the happier memories she has left you with. Meanwhile we hope you can get the aftermath over with as smoothly as these sombre circumstances permit. Very best wishes.

So sorry for your loss.
It sounds as though she went peacefully and in her own way, which is how it should be,
RIP.

My love to you.
JP

Dear Blobby, so sorry and sad to hear of your loss. (I've read your blog for years, but never commented). Your post today struck a chord. My wife (yes, used to be married to a woman), died 23 years ago today, June 30. We had been married 23 years, and our anniversary was June 23. Hard to believe she's been gone as long a time as we were married. Brain cancer, same type as McCain, Ted Kennedy, Joe Biden's son, etc. -- incurable, even still. What hit me in your post was your leaving your Mom and then getting the news. Same situation: My daughter (then 15) and I left my wife in the hospital (she was there because she had had what we thought was a temporary emergency) to go home and prepare for the delivery of a hospital bed. After we left, she died, and we were called back. I swear that my wife somehow knew that she didn't want to put us through a "death scene," when we had already said our loving good-byes for what we thought was just the afternoon. Ah, great mystery of life! I share and understand your sorrow.

My deep condolences to you and your family.

Oh dear. I know it was unexpectedly expected, but losing a parent is still rough. Good wishes for you through this.