Twelve Thirty (Young Girls Are Coming to the Canyon) 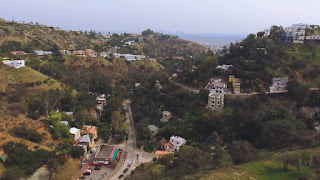 Second movie in a row that is a documentary - at least of sorts.

Echo in the Canyon is about the Laurel Canyon music scene in Los Angeles going from about 1964-69.

The impetus for the subject came from a little known (never, to me) 1969 movie called Model Shop. Apparently it takes place in Laurel Canyon and it got the head of a record company and Jakob Dylan exploring the music of the time.  As if the it needed discovering.

Don't get me wrong - you know my love of music. But some of it seemed so forced when the actual stories were so much better. The music scene of the time was so incestuous, but collaborative.

I loved the stories about certain songs and bands, and they had representation on screen. There was some clear omissions even in discussion (Joni Mitchell). I get that some might not have wanted to be part of the project, being on screen, but to leave out some truly influential artists was wrong.

When someone (I'm blanking) talks about 'Dylan" and Jakob Dylan says they'll have to be more specific - trust me, they don't.  Jakob, you had one marginal hit and 23 years ago. When someone speaks "Dylan" it's your father, or Dylan Thomas.

Had it been a strict documentary on these artists (Beach Boys, Byrds, Association, Mamas and the Papas, Buffalo Springfield.....) it would have been A+, but Dylan (Jakob, that is) had to make it about him.

He rerecorded some of the songs in question. And he and others (Beck, Regina Spector, Fiona Apple, Snore-a Jones) had to play them live.  This worked well twice - one with a recording (Mamas & Papas "Go Where You Wanna Go" and one live (the Byrds' "Goin' Back").   The latter surprised me more because Beck and Dylan did well, but I found out it was a Carole King written song. I had no idea.

So save those two songs, the rest of Jakob's interpretations came out sounding like "One Headlight" redux.

I love Jackson Browne, but he seemed out of place here. He might have been influenced by the artists, but he didn't contribute what you thought he might or should.  At least with Tom Petty, he put all the references into context.

I don't know if this is a run out and see movie for any of you. I figured it wouldn't stay in our local art house theater short of this opening week, though Rotten Tomatoes gives it a very high rating.

A small business would definitely vouch for these services as they come with extra capabilities which would later prove to be priceless assets to the organizations. And it is because of the phone service coming at cost-effective prices, the services of small Business Phone Service have not been difficult to obtain.