First off, and I've said it before: I read most of the obituaries most of the days. Sundays are a drag because there are SO many of them. I mean, how many bodies are they keeping on ice just to hold off to till the Sunday announcement.

I tend to gloss over the ones that start out, "went to home to the Lord". That' never going to end well for me. And clearly, it didn't end well for them either.

I also try to figure how people die, which is usually by the "in lieu of flowers....." section. I do like the ones who just say they died from an addiction. Just call it out - let people know it's an issue that need attention, even if it's in line 7 of an 8 line obit. 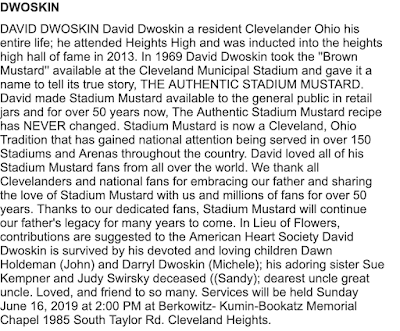 First off, I love Stadium Mustard, so.......there's that.  But I love love love how his family are almost afterthoughts in this obit.

I have almost no doubt (hey baby, hey baby hey....boys say, boys say) that the deceased pre-wrote the sucker.

....and he died from heart disease.........I'm guessing, and that the hot dog on which he placed that mustard were beef.

no doubt a hebrew national (my fave). I'm a yellow mustard only girl, so I have never tried stadium mustard.

I love a good proper mustard.
Right now I am enjoying a pungent one from Britain .