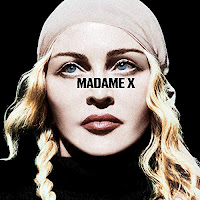 I will go on record:  I did not purchase the new Madonna disk: Madame X.  After sampling it via iTunes, I can assuredly say, I shant be purchasing it in the future either. Or checking it out of the liberry for free. It seems, I won't have to worry about having to turn the radio station too fast, as clearly, getting ON the radio isn't happening.

Listen, Madonna claims ageism, but that is a cop out. No one is stopping her for doing what she wants to do - clearly. Because, someone really should. She's claiming ageism maybe because no one is listening to her - and this is a real thing. But it's not ageism.

I attempted to listen to all of her songs on the deluxe version, which you only get a 90 second clip per tune. Folks that is 22.5 minutes of "music".   To be fair, I didn't listen to 22.5 minutes of music. It turns out I could only make it through one full 90 second clip, The  rest were just unlistenable for one and half minutes. I can't imagine listening to 64 minutes of the entire disk.

If Madonna has an issue with age, take it up with Mother Nature. Save, I believe (don't make me go back and relisten.......please, I beg of you!) only one song doesn't have her auto-tuned. And many of those are not slightly.  But full-on Britney.  So Madge, if your voice can no longer sustain "singing", maybe you find another avenue for your art.

And yes, "art". Her big word. "This is MY art....MY vision".  Great for you. But let's call it what it really is: commerce. Or should be. And people are not not buying this release because of your age, hon. If it were good, people would buy. That's the way it works.  Stop deflecting.

Madge and Springsteen's disks came out the same day.  He is still hovering at the top 10 of iTunes. She bouncing from 54 back to 36. But Madonna - Fleetwood Mac's Greatest Hits, which is 31 years old - is beating both your and Springsteen.  Hell, someone name Chung-Ha is above you by 20 notches.  Chung Fucking Ha.

Yes, she topped the Billboard album charts, which is nice for the records books, but - and no offense to Billboard - some of their charts are no longer based on sales. And even with disks, long gone are the days of bands and artists who sold 900,000+ units moved per week.  Madonna had 33,000.  And keep in mind, Billboard is a week behind in sales, so the iTunes download stuff would be a better indicator of how well the Madame X is not doing.

I don't think it's in Madonna's nature to say something she's put out isn't good. She doesn't have to act her age per se, but she should know she's not a black barely adult male from the 'hood.

Maybe the continual eye patch she now wears is from macular degeneration. Maybe the grille are just her new dentures.

Now Madge - THAT is ageism.

Oh - and your comparison to your shitty MDNA album being leaked on-line to rape?  And likening your recent NYT interview to rape?   Sit. the. fuck. down.
Posted by Blobby at 12:06 AM

She sang on Eurovision this year in Tel Aviv. Did you see it?
JP

(Re JP's comment above). It was after her appearance at Eurovision which initially made me think that this new album may have something going for it. (Her last that I really liked was 'Ray of Light', which perhaps says everything!) But after all the inverted thumbs for 'Madame X', to which I can add this post, not so sure now. But suppose I really ought to listen to it first, even if the wind's gone out of my curiosity.

Ageism, huh? I couldn't stand her when she was young! Give me somebody with a substantial voice that lasts through the years. Aretha Franklyn, Lena Horne, Ella Fitzgerald, Cyndi Lauper for goodness sakes!

JP - last I looked, EV was for undiscovered artists, not established AARP members who think they're Jewish - and are not.