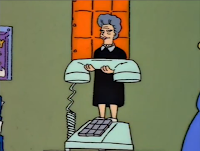 My comic reading in the news paper has gone kaput.  Once Foxtrot and Boondocks went away (this was eons after Calvin and Hobbes went bye-bye), and Doonesbury was put on months and months of reruns, I limited my reading to Speed Bump and Bizarro.

Doonesbury came back, but I never picked it back up. Allegedly Boondocks is coming back. Even the new Bloom County I didn't bother with.

Way back when we lived in Columbus, on a lark, I read Apartment 3-G. It was hilariously stupid. I was never a Golden Girls fan (I know, the one gay guy who didn't care for it), but I remember a bit from it that made me laugh.

True that. Slowest moving storyline ever.

I was never a Mary Worth person. I'd say "because I'm not 50+", but I am. 710 reads it just out of habit, but he reads all the comics I think. So now and then, he'll read me a storyline - this last one being about and elderly person being taken for all her money because that's what happens to old people. I think she was catfished.

And so you know Mary Worth is for old people, she'll let you see for yourself......

In my heart of hearts, I know 80s is considered "oldies" to some generation. And not so deep down, I know people my age area allowed to move into the same independent living facility where my mother went last year. And sure, I'm 'falls risk', but I don't see myself as Mary Worth old.

....and for the record, the woman in question did find companionship with one of Mary's friends.... 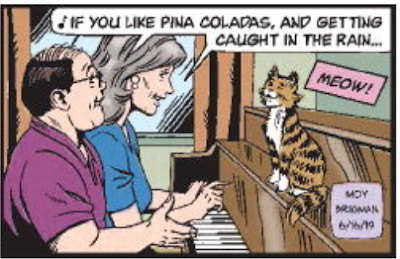 ....and yes, this is older than the Motels, so, I feel slightly better.

Email ThisBlogThis!Share to TwitterShare to FacebookShare to Pinterest
Labels: Comic

Mary Worth is still around? Shocking! She's looking a lot younger than she did when I was a kid and ignoring her. Wizard of Id and B.C. for me! As for music, the oldies are getting younger too!