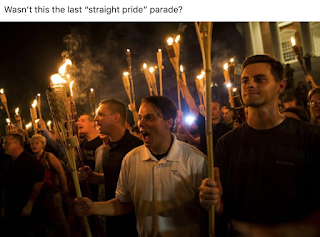 I don't know if if 'straight pride' is really a thing or not.  I'm going with 'not' - only because straight white people are pretty much lazy.

They don't have to get off their asses to do stuff because, well.........privilege.

I did laugh at Christopher's FB post, which I co-opted for my main image.

Other than being mean-spirited (assuming it happens), what do these straight folk really want to prove?  That they can finally be publicly affectionate?

This is why I hate writing lately. The amount of hate towards anyone not white and straight (this isn't even an 'or' situation) is swelling........and big time. And there is seemingly no end.  It. Is. Exhausting.  While I can also empathize with anyone of colour, or a woman - OR both (this does warrant an 'or'), I honestly can't truly imagine being in their shoes.

Anyone care to make wagers on if this will truly happen??

Regarding my post yesterday, honestly, I wasn't fishing......or phishing.  Or catfishing.

The stats wouldn't necessarily make my argument. I haven't hit 500+ reads in a day in forever. Though the day before wasn't bad. Anymore I hover at the 270 mark.  Some dips to the 180s.  Eeek.  Word must have gotten out that 'the end is near'.

Having written it, I feel a little better  - read: less angsty - about potentially changing direction / lessening the number of posts / or yes, even closing shoppe.  Again, don't worry about the latter - but I feel the need to keep it in the mix.  I don't even know if I'll do the former.

I feel a little sad for Becca though. In yesterday's comments, she couldn't believe my blog is 17  Clearly she missed that post. She equated it with the length of her marriage, but she's been married almost 19........so her husband should take a slight offense that she doesn't know their anniversary.


Oh now I'm sad. Why couldn't I have been writing about President Gore?

these "proud str8 white boys" that want this "parade" can't get laid, spend their time in mommy's basement at their computers, can recite the "star wars" movies verbatim. they know that they will be a minority in only 20-30 years. they are toxic, they are lazy, they want the world handed to them. and they whine like donald dump. "no one listens to us" they whine.

I don't feel the way they do. I made something of myself.