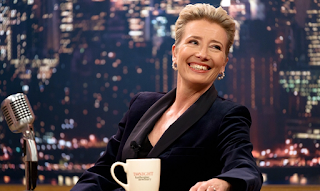 I made the mistake Late Night (if there is a website, I couldn't find it) would be a comedy.

Maybe it's supposed to be, but I can tell you, I smirked once. No laugh.

If it's not supposed to be, then I went in with the complete wrong mindset. I have a feeling it was to be a comedy, but it never quite got there.

The movie belongs to Emma Thompson, hands down. She had an incredibly strong performance, especially when considering with which she has to work. Then Amy Ryan. Then John Lithgow. Then a fire hydrant. Then Mindy Kaling.

I always figured Kaling was funnier than this. Her Office written episodes always stood out. Her own Mindy Project show never quite measured up. And then there was that horrid Ocean's 8 thingy.  She was just as unnatural here as she was in her Project show.

If played as more of a drama (or even a satire), the movie kind of works, except there isn't quite enough depth. It tried too hard to be the Devil Wears Prada Moments, and there it falls totally flat.

The real problem is the humour, or lack of it. The attempted humour. I get the jokes that don't land because they weren't supposed to as part of the plot narrative. It was the ones that were meant to be funny - - and still weren't.

The least plausible thing about the movie of course was the reverse #metoo event. (semi spoiler coming).   The always great Ryan, as the boss, would have never let this ending work. She would have rightly terminated the contract of the person of which she was already looking to fire. The second least plausible item was Kaling's character's hiring to the show as a writer. Even as a "diversity hire", just about anyone else off the street would have been a better selection.

While the movie has only been out two weeks, it's already in limited theaters and limited times. As there were only FOUR of us in the theater, it does not bode well for week three.

You might want to catch this one on cable. You actually might have to, since, well.....tick tick tick.....

Without Emma T. it would have been (yet more?) dismal. You have to dismiss any thoughts of plausibility from your head if you want to get any satisfaction from it, and it's true that there is some - but only 'some' - there. A bit of mileage in the story was evident though it could have been SO much better - and I agree that the casting of charisma-devoid Kaling was an unfortunate mis-step of trying to do the 'right' thing in this ultra-sensitive culturally-aware era.

Agreed RB on the Kaling thing, but she wrote and produced it, so.......it was a vehicle for herself. She has been a funny writer......just not here.