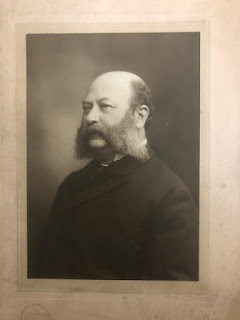 Cookie is coming back to the 216 at the end of July to attend a national genealogy conference that is being held here.

Alas, I will not be in town to see him, not that he asked.

I also didn't know about the genealogy conference.....not that anyone asked.

For the nominal fee, I might have actually gone to it - had I known. Still won't be in town though.

Now I see where I get my long flowing locks and superior sideburns!

Actually, this is the first pic I've seen of him.  I've seen his headstone dozens of time. Each time I came back from the cemetery, I'd silently thank my parents for not naming me after him.

However, I have just come into some possession of some turn of the century items that I'll look through.  19th to 20th century, not 20th to 21st.

I edited out some printing underneath his pic, as it was something new to me, but part of it was his name and the title of Supreme Commander.  What is underneath that, to what his title is related,  is for me to research and find out.

Now you see why I might want to go to this genealogy thing.  And yes, part of it is to meet Cookie.

Song by: Shelby Lynne
Posted by Blobby at 12:07 AM

fearsome beard may dig the sideburns. I'd like to meet cookie some day too. I can see the family resemblance to you in the eyes.

Well I was about to ask to see if you were going to be there! I am going to need to escape all that tsuris and kvetching about "Ach! It's too cold in the session room," and "Ach, I am schvitzing in that room it's so hot." And every bubbie will either smell like they bathed in Arpege or schmaltz. So you won't be in town? Bummer.

I am going to be at the beach at that time. Fudge!

Genealogy is amazing; good for you to attend !