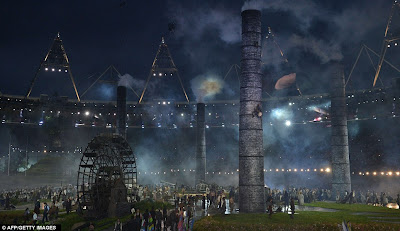 I really wanted to go out last night for dinner, but it was raining and it had been a shitty week. So we stayed in and watched the "opening ceremonies", even though they had probably happened hours before.

I had to be subjected to Meredith Viera and Matt Lauer's insipid commentary  - seriously, these people do this for a living and get paid upwards of $20MM a year?  Hacks.

As Olympic ceremonies go, it didn't suck....and that's saying something.

I quite liked the Industrial Revolution part, even if the workers coming out of the trees and the molten hot ring was straight out of Isengard and Mt. Doom. Tolkien was British - it kind of ties together.

I enjoyed the 40 years of British music, but was taken back by Prodigy's "Smack My Bitch Up".  My word - the Queen was there! (which btw, that little Jame Bond montage sucked, and could she have looked more annoyed at those deaf kids singing "God Save the Queen"?).

While I liked that the U.K. was celebrating National Health Care (oh, you know Bohner was having a fucking coronary!), the creepy effigy of Lord Voldemort was just wrong. Had I not known it was coming or had to hear Lauer say it, I'm not sure anyone would have known what it / he was supposed to be.

It turns out, the U.S. did have some of the f'ugliest outfits in that parade. And what was it with the chicks holding the name of the country?  They looked like Joan Cusak in Sixteen Candles in her halo. I kept picturing her trying to dance or get a drink of water. 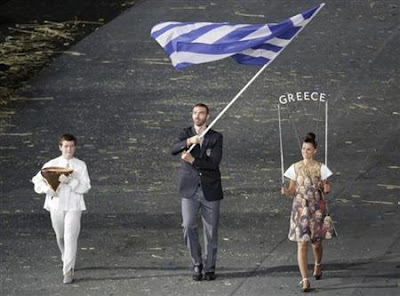 But Bob Costas bored me - and like I said, I had a shitty week, so I didn't wait until David Beckham drove the torch up the Thames. I went to bed.

Song by: Mary Chapin Carpenter
Posted by Blobby at 7:14 AM

Matt and Meredith are dumb but the absolute worst was and always is...Costas..I mean, shut the fuck up! He kept talking OVER Arctic Monkeys covering "Come Together"...hard to tell how good they were with you blabbering on about how good they were. A-hole!

I couldn't watch...the commercials were longer than what little they were airing of the ceremony. As for the banter, all I could think of was that episode of Frasier when he wanted to host the Thanksgiving day parade.

NBC really treated it as a "here we go again" event rather then the world uniting occasion it is.

Lighting the torch during “Eclipse” by Pink Floyd as fireworks exploded everywhere was epic!

It was no Beijing.