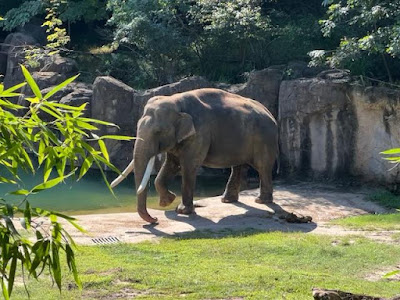 It's becoming more and more official - there is less and less for 710 and myself to explore in DC that we have not done before.
Yes, museums change exhibits, but we've been to most - if not all of them.
Then the other things: Supreme Court - check.  Liberry of Congress - check. Capitol, OEOB, White House - check x3. National Archives?  Yeah. All of the war memorials and presidential ones too.
We've even done Walter Reed's museum of medical oddities.
This isn't a bad thing. And normally we are fine just walking and exploring. It's just hard to do at 94 degrees and in a heavy plastic boot (though in our last day, I did make it 8 miles of walking in that thing).
The one things we had not done was the National Zoo. I wanted to go, but mostly just for the pandas. Well, only for the pandas.
I find zoos to be D-pressing.
Caged animals just seems cruel to me. And the DC one was no different. Yeah, I get some animals it keeps them safe from being extinct or poached. The above elephant was extremely regal. Those tusks were impressive and no doubt would have been stolen from him if out in the wild.
The teeny size of the Zebra enclosure was horrific to me. Then I got to see that it abutted the cheetah one, while slightly bigger, could NEVER let a cheetah remotely get to their running speed. Add to that, the cat hung at the back fence, right next to where the zebra was housed.
The orangutans at least had the ability to climb towers and swing part way across the park to another enclosure - though we didn't actually get to see that.
But we did get to see the pandas. 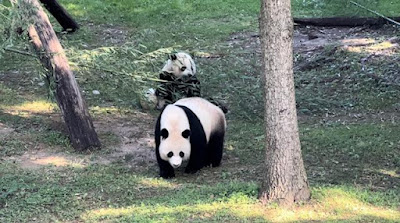 This exhibit wasn't nearly as crowded as one might think, but the entire zoo wasn't either at first. I get that they're giant pandas, but they still seemed huge to me. 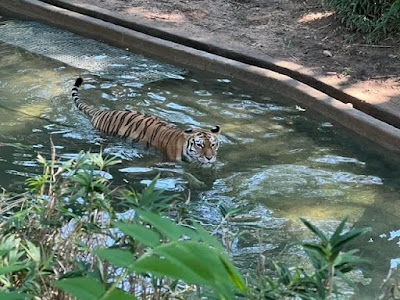 This guy was impressive too. 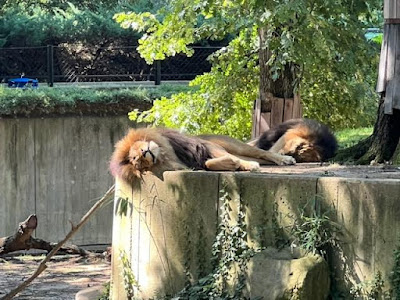 This is what I truly expected to see for most of the animals on a day in the 90s. Sleeping. These two lions took advantage of the sun and just napped. 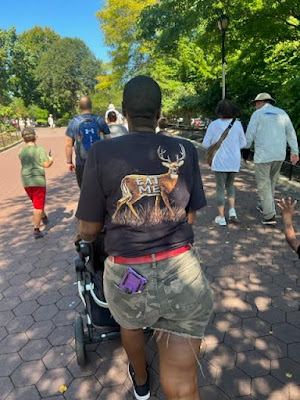 I was thinking that maybe it best if this lady didn't actually frequent zoos.
The zoo might have been the last Smithsonian thing we had left to do in DC - and we did the Cooper Hewitt one in NYC a few years back.
Granted, we'll be back. We love DC. But now we can just take our time and wander even more than we have.
Song by: Fleetwood Mac
Posted by Blobby at 12:07 AM

Agreed. Zoos are horrible 'establishments' - second only to circuses with animal 'performers' where, I remember as a youngster, they had off-performance times when the public could go and gawp at the animals in their pokey little cages. Makes me feel ill now just to recall them.

The redone air and space will open this fall, worth a visit

I saw the DC Pandas in 1974 they were the first ones loaned/to US. by China Hsing Hsing and Ling, Ling if I remember correctly .

I hope elephant populations will hang on. They are such majestic creatures.