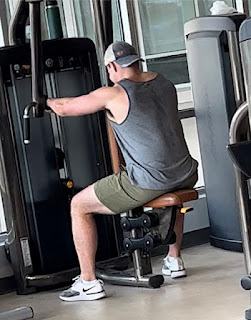 There is a certain irony about going back to the gym.
I mean: What's the end game?  It still all ends with entropy and death.
My genetics, on both sides, could have me living well into my 90s.  I have stated before, and no doubt will again, I have no desire to do that.
My next colonoscopy will be my last. In my mind, I have had my last pneumovax. Ditto with tetanus. I suppose I will get flu shots until my mid-60s. Then I'll let nature take its course.
So what is it with this obsession to be in better shape and healthier?
Granted, I go to the gym the same time every day. Monday - Friday I am inarguably the oldest person at said gym.......and I'm talking maybe by 30 years. As I leave, there is a guy who comes in who might be older - but in reality, we are probably the same age.
On weekends, I've only stumbled upon one older gentleman. Honestly, I might be the second oldest member. Period.  Yes, there are multiple hours unaccounted for, but really, what are the odds any of those dudes being older?
You'd think with such a younger crowd there'd be a more attractive sort.  I'm not saying there aren't, but extremely few to whom I find attractive. Again, I see the same 10 people in the morning and not many different on the weekend days. I can think of three who even remotely float my boat. And only one of them is regular - and lately he's not. Bastard.
I normally do not strike up conversations at the gym. I selected this gym because at the time I knew no one who went there (as it turns out I know two who are members).  I'm not rude, but I'm not there to be social. My last gym was. Too much so.
I can count on one hand how many conversations I've had, and two of them are with someone with whom I work. One other was semi work-related, as he is in residency where I work. One was a dental student who struck up a convo only to have it morph how he works really hard, but how his testosterone is really high and that is "always horny".
I had lots of questions and comments, yet I have lots of brains and the want of keeping all my teeth, so I said nothing. He is nice to look at though.
The last conversation, again, I did not initiate. And it was in the locker room, which is always awkward.
The much younger man (late 20s?)  asked if I was a runner, as he had seen the shoes I had - which are for runners. I still don't identify as one, but he caught me at a weak moment, as I had just had a personal best that I thought I could never achieve, so I engaged a little as I tried to get ready to shower.  He mentioned he ran for his college (I'm guessing track) and I had mentioned high school running for me.  .....and then........
"Oh wow! There were probably no portable music devices back then!".
My outside chuckled.  My inside said "fuck. you."   .....but I said it only in my head and with a smile on my face.  I wondered, as I showered, if down the road it would be one of those THWIT things of which Spo wrote about weeks back. I have them all the time, and I kind of hope this "kid" does too.....eventually.
Honestly, I don't think my gym time comes down to living longer, and yes, inadvertently I'm becoming (?) healthier. But to be truthful, it comes down to vanity.  Not Vanity.  She dead.
Again - to what end. It's not like I'm single or dating. I just caught myself in the mirror one day this last winter and didn't like what I saw. Simple as that. Vanity.
The second irony of this gym thing is:  because of my vanity, I'll end up living longer.
Bother.
Song by: Blondie
Posted by Blobby at 12:07 AM

Dude. There are better ways to go and worse ways to go. Tetanus seems like one of the worse ways.

With the new anti-aging tech on its way you'll probably live to 120.

I might take of skydiving and race car driving if I live to 80,

Good for you! This keeps away muscle and bone wasting and other good things.