Have You Never Been Mellow? 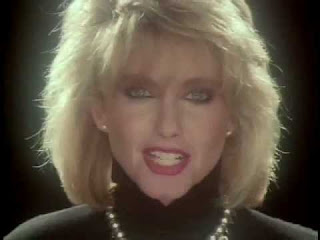 The death of Olivia Newton-John has messed with my blog posts. I actually worked ahead to have a free day or two of writing, but alas, Olivia is fucking with the universe upon her death.
I can't say I was a fan. I wasn't not one either. She was just there. Kind of always.
If you were a person - gal, guy, neither or both - of the 70s, you could not escape her. I'm not even talking 1981's Physical, which dominated that year in terms of charting. At the time - probably no longer - she had the longest run at #1 on Billboard's Hot 100, with I'm thinking 11 or 14 weeks for the title track.
Before that though, going back to 1972, she had her first (?) (Morty will know) U.S. hit with Bob Dylan's "If Not For You".  Yes.  Newton-John does Dylan.  Somewhere, Meredity just passed out.
She had serious output for like 5 years running -  "If You Love Me Let Me Know", "Please Mr. Please", "Let Me Be There", "Have You Never Been Mellow", "Deeper Than the Night", "A Little More Love" - and I'm sure more.  Yes, that doesn't even get into the Physical, Grease or Xanadu disks.
ONJ also covered Paul Simon, Spencer Davis Group, Beach Boys, Beatles, Don McLean and just about any other artist from the late 60s and early 70s.
I admit to having Totally Hot and her single "Twist of Fate" which was a My Music Monday post for a Guilty Pleasure theme, five years ago. The blog image actually comes from that video, though you could just as easily mistaken it for a Knots Landing promo and thinking this was a more mod Donna Mills.
There are so many gays that love the kitschiness of Xanadu. Their FB feeds were FLOODED with it yesterday. I don't get it - but I didn't see it either. ELO, ONJ and Rollerskating and Gene Kelly?  Sure, on paper it sounds like it would sweep the Oscars, but...............
And to keep that thread going for newer readers:  I've never seen Grease either.
I mean, what, Stockard Channing was a 38 year old high school student?  Travolta pretends to like girls?  Jeff Conaway?  It was the last 70s, there was no escaping the music on the radio, I didn't (and don't) need to see the film. I saw Becky and Slusser (that bastard owes me $20!) act out most of the disk thing on a drunken night at the latter's house. I doubt the movie cast did better.
So I get it, and I don't, when so many social media posts say, "I'm devastated.......".   ONJ was never a go-to for me. She wasn't a gay beacon of anything to / for me. Sure it's sad, but it's hard to be devastated about someone in their 70s dying, and they've had cancer for 40 years.  I get I'm more of a realist / fatalist than most, so I can put the art /artist in one section and the reality of life and death in another.
I get it. I'm cold and heartless. But I'm not. Olivia was a presence of my youth, but no so much so that I followed her career. For a while, it was just unavoidable,
I'll leave you with, a cover of ONJ's "Have You Never Been Mellow" by the group Pet.  It hails from a disk called the Spirit of '73, which celebrated songs from that year by women (redone by women), but it was to bring awareness to the fragility of Roe v Wade from that same time.
Song by: Olivia Newton-John
Posted by Blobby at 12:07 AM

I am not Heartbroken over Olivia Newton John, but No one deserves a decades long battle with cancer. She was talented in a popular way. I will save my grief if I outlive Stockard Channing

Since first watching it on its release in 1978 I've always considered 'Grease' as one of the very WORST films I personally have EVER seen. Even just thinking about it now makes me absolutely C-R-I-N-G-E! Never having been a fan of John Trevolting (since his appearance in 'Carrie') hasn't helped, though not so regarding Olivia Neutron-Bomb whom I've always liked. I will give that film one positive, though - several of the songs, even the majority of them, are pretty good and well presented on screen. But do I ever want view the whole damn film again? Guess!